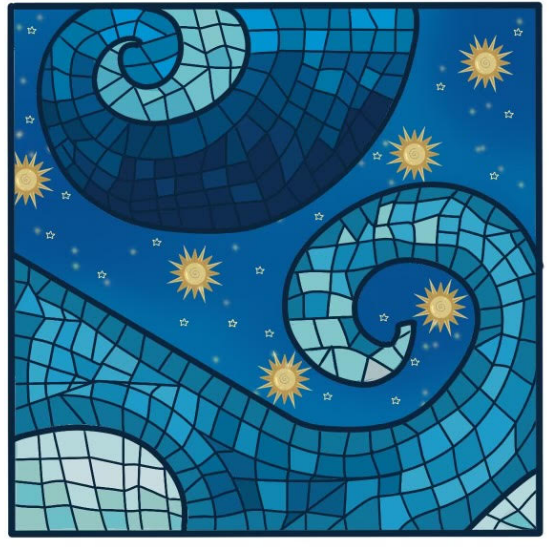 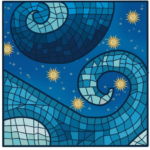 High school students at Mount Madonna School (MMS) – are preparing for their upcoming production of “Mamma Mia!” in many ways, including a colorful, Grecian mosaic-inspired art and writing project.

Each student was assigned to create an artistic rendering and brief written statement about how the artistic choices relate to aspects of the “Mamma Mia!” character the student portrays in the upcoming show.

“Mamma Mia!” tells the story of how, on the eve of her wedding, a young woman’s quest to discover her father’s identity brings three men from her mother’s past back to the Greek island they last visited 20 years ago. Set to the hit songs of the Swedish pop band ABBA, “Mamma Mia!” introduces Sophie Sheridan and her mother, Donna, in a hilarious, “take-a-chance” tale of love, laughter and friendship as portrayed on stage by Mount Madonna School’s high school cast.

After headstrong Sophie secretly reads her mother’s journals, she narrows down her father’s identity to three possibilities. The story heats up as Sophie, unbeknownst to 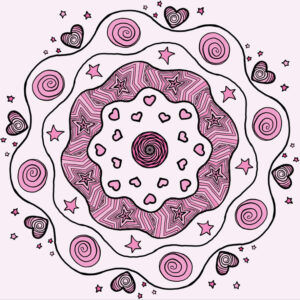 Donna, invites all three men to her wedding.

Performances are January 27 at 7:00pm, January 28 at 2:00pm and a special sing-along performance is offered on January 29 at 2:00pm at the Hawks’ Nest Theater at Mount Madonna School. Please note: “Mamma Mia!” includes some mature-themed content which may not be suitable for young children.

The Saturday, January 28 performance is nearly sold out, with just a few tickets remaining. Tickets for all performances are available at mms-mammamia.brownpapertickets.com. Adult tickets are $15; $10 for 18 and under (Jan. 27-28. Tickets for the sing-along performance (Jan 29) are $20. All seats are reserved.

Students’ artworks displayed their colorful creativity, and some of the pieces will be on view at the theater during the performances.

“I tried to do my mosaic in an edgy style,” commented sophomore Lucy Harris. “My character is really into music and is a little antisocial, yet still has a weird amount of confidence. So confident, edgy colors like red, brown, purple and dark green came to mind. I chose not to do a premade mosaic because I think my character is very original and kind of a weirdo. The shapes are also in their own way supposed to convey originality and edgy.”