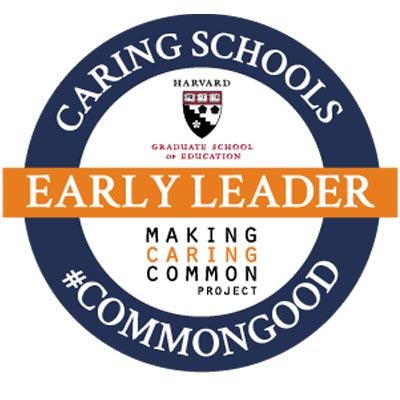 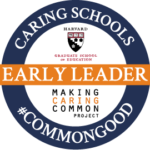 “Several years ago, the Harvard Graduate School of Education released a report entitled, Turning the Tide. The report advocated using the college admission process to ‘…send compelling messages that both ethical engagement – especially concern for others and the common good – and intellectual engagement are highly important’,” shared Mount Madonna’s Director of Upper School Shannon Kelly. ”Reading the report, and seeing the buzz it generated in higher education and the college admission world was encouraging. It is exciting to see other people recognizing that the kind of work we have been doing at Mount Madonna School for the last 40 years is essential. 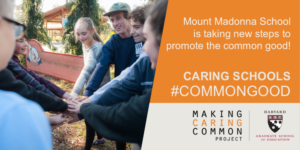 “From that point forward I have followed projects coming out of the Harvard Graduate School of Education,” she continued. “I want to amplify what we are already doing at Mount Madonna School and create new programs that fit with this important movement.”

The campaign seeks to advance the following specific goals by working with schools nationwide:

These goals align with and build on Making Caring Common’s successful Turning the Tide initiative that has engaged more than 175 college admissions offices nationwide.

“Our country is at a crossroads,” said Dr. Richard Weissbourd, senior lecturer at the Harvard Graduate School of Education and faculty director of the Making Caring Common project. “We need to mobilize the great strengths of Americans to prepare young people to build strong, inclusive communities and to protect democracy. This work has perhaps never been more important.”

To join the campaign, schools commit to taking substantial, meaningful action to advance one or more of the campaign’s goals and to engage in a self-assessment or evaluation process to measure the impact of their action(s). Schools that commit to, implement, and evaluate the impact of their efforts will earn a special designation from Making Caring Common. At Mount Madonna School, a significant part of this process is meaningful reflection:

“What does it mean to be a citizen, both locally and globally?” commented Kelly. “How do we move beyond thinking of the rights we have as citizens, to the realm of responsibilities? At Mount Madonna School we ask our students to care take this beautiful land they are schooled on. We ask them to understand the impact of their choices environmentally and socially. We provide them opportunities to travel and engage with people, cultures, and environments different than they are used to. They have conversations with individuals with different moral matrices. They are asked to explore who they are, what they value, and what responsibilities they have to themselves and their communities; all of these things help our students develop into caring and engaged citizens.”

Mount Madonna School was one of more than 135 schools that joined the campaign as “early leaders” who helped to inform, shape, and build momentum for the campaign. Mount Madonna School’s commitments include a newly developed Sustainability Capstone project.  Mount Madonna’s current seniors are working on integrated projects based on the United Nation’s sustainability goals. The school will also support a high quality and sustained community service requirement in both the middle and high school. This work will be led by Kelly, with support from Mount Madonna’s administration and middle and high school faculty.

As part of the launch, Mount Madonna School today is joining other early leaders on Facebook and Twitter using the Caring Schools #CommonGood hashtag to express support for the campaign, publicly commit to a chosen action(s), and encourage schools nationwide to join the effort. New schools interested in joining the campaign are encouraged to share a photo and use the text “Count us in! We’re joining the Caring Schools #CommonGood campaign.” on Facebook and Twitter on March 6.

More information about how schools, parents, and students can join the campaign can be found at commongoodcampaign.makingcaringcommon.org.

About Mount Madonna School
Nestled among the redwoods on 355 mountaintop acres, Mount Madonna is a safe and nurturing college-preparatory school that supports students in becoming caring, self-aware and articulate critical thinkers, who are prepared to meet challenges with perseverance, creativity and integrity. The CAIS and WASC accredited program emphasizes academic excellence, creative self-expression and positive character development.