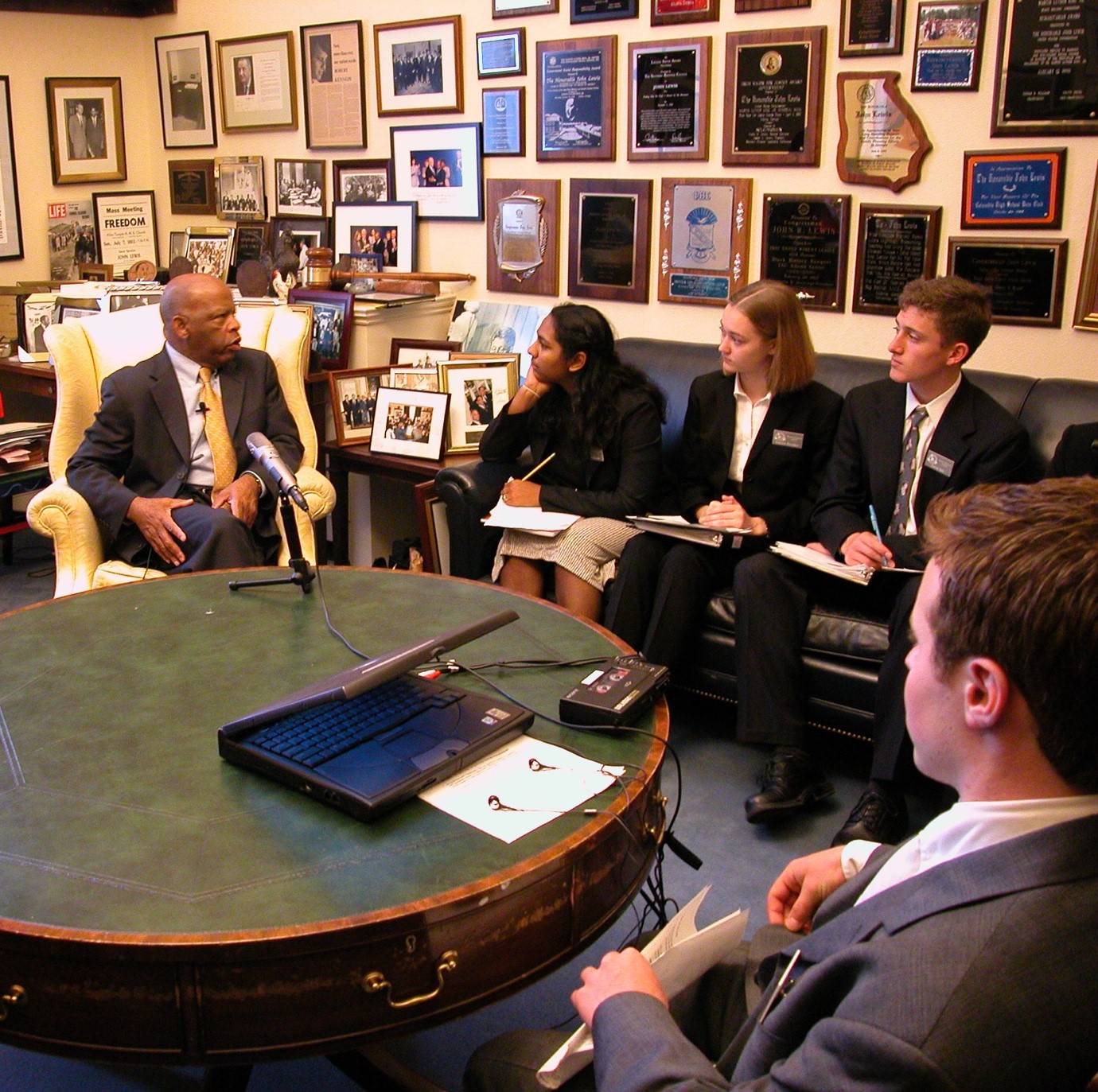 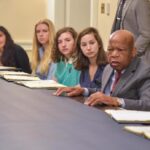 The passing of iconic Congressman John Lewis is a deep loss to our nation and to the world. For me, it was also quite personal as our Mount Madonna School students had the honor of interviewing him in Washington, D.C. many times over the years. After the second time we interviewed him he would remember our group, and always express appreciation that the students came well prepared to ask meaningful questions, as he did in this short video clip (below) from our final meeting with him in 2018.

One of my favorite moments with Congressman Lewis that caught us all by complete surprise took place in 2006. We arrived at our meeting room in the Cannon House Office Building and got our cameras set up, and we waited … and waited. A half-hour went by and then it was almost an hour. We were told by his staff he had been “detained.” Even though he was well behind schedule, Congressman Lewis finally kept his appointment with us, as he was a man who honored his promises. When he arrived, he said to us, “Sorry that I’m running a little late, but I just got out of jail.”  That got a big surprised laugh from all of us, as he went on to explain, “Seven of us were arrested at the embassy of Sudan today, protesting what is going on there, and trying to sensitize and educate more American people around the world to put pressure on our government to do more. And the United Nations, and others really, to stop the killing, the mass murdering, the raping, and really put a mind to genocide.” I think that was the best opening line I ever heard at the beginning of an interview, and a superb excuse for being late. 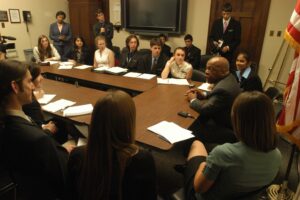 Congressman Lewis was a great storyteller. He was constantly being interviewed so the challenge was to find a story he had not already told. I remember one moment when a student asked him what was it was like for him March 7, 1965 on that fateful march across the Edmund Pettus Bridge in Selma, Alabama. The student wanted to know what was going through his mind when it was announced through a megaphone that this was an illegal march and the marchers had ten minutes to disperse and then, just five minutes later, the officers fired tear gas, turned on fire hoses, turned attack dogs loose and then charged forward and began beating the marchers? For just a moment you could see a change in Congressman Lewis’s eyes, as he seemed to go inside and became very quiet. It was a pause in which we shared something with him that I can’t quite define. This march was a defining moment in his life, and certainly a defining moment for our nation. Bloody Sunday, as it is called, was a major turning point of the civil rights movement. 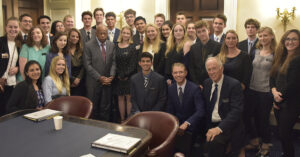 Martin Luther King could not come that day, so the march was co-led by this brave young man just out of college. For his trouble, John suffered a fractured skull and that day, John Lewis stepped into history. He told us, “I thought I was going to die that day.” It was certainly not the only time John Lewis put his life on the line, and as it turned out, he was to give the full measure of his life to the principles of equality and non-violence. The filmed footage of that brutal attack brought the civil rights struggle home to the American people as nothing else could, much as the video of the recent death of George Floyd. It was so impactful that President Johnson and the Congress were forced to act, leading to the passage of the Voting Rights Act of 1965.

Every time Congressman Lewis met us, he did so with kindness and humility. He would shake the hand of each student and warmly greet them. He had a few self-deprecating jokes that got better with age. When we were in the room with him we had his full attention. There was nowhere else to be. The students were spellbound, knowing they were meeting a great man; great in his sacrifice, his humility, his perseverance, his commitment, and oh, so great in kindness. 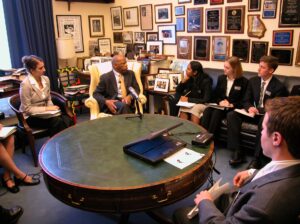 We will miss him as an iconic champion of human decency, and in a more personal way as a friend, although I can’t really make that claim. I am guessing that this feels like a personal loss for many, even to those who like me, may have only known him in all too brief moments of the generous gift of time and spirit that inspired our students. John Lewis was a friend to all of humanity and he embodied the best of what makes us human beings. My hope is that a little of what transformed this sharecropper’s son into a fierce champion of equality and non-violence will be carried forward by the Mount Madonna students who had the privilege of meeting and speaking with him over the past two decades. It is with sadness and great gratitude that we say good-bye.

He said to us in 2006, “As Dr. King would say, we’re going to learn to live together as brothers and sisters, or we will perish as fools. And we will come to the conclusion that we are one people; we are one family, or what I like to call one house, one world. We have to, we don’t have any choice.”  I think that even the chickens he always told us he preached to as a boy, and who never said amen, would have to finally say “Amen John…Amen.”