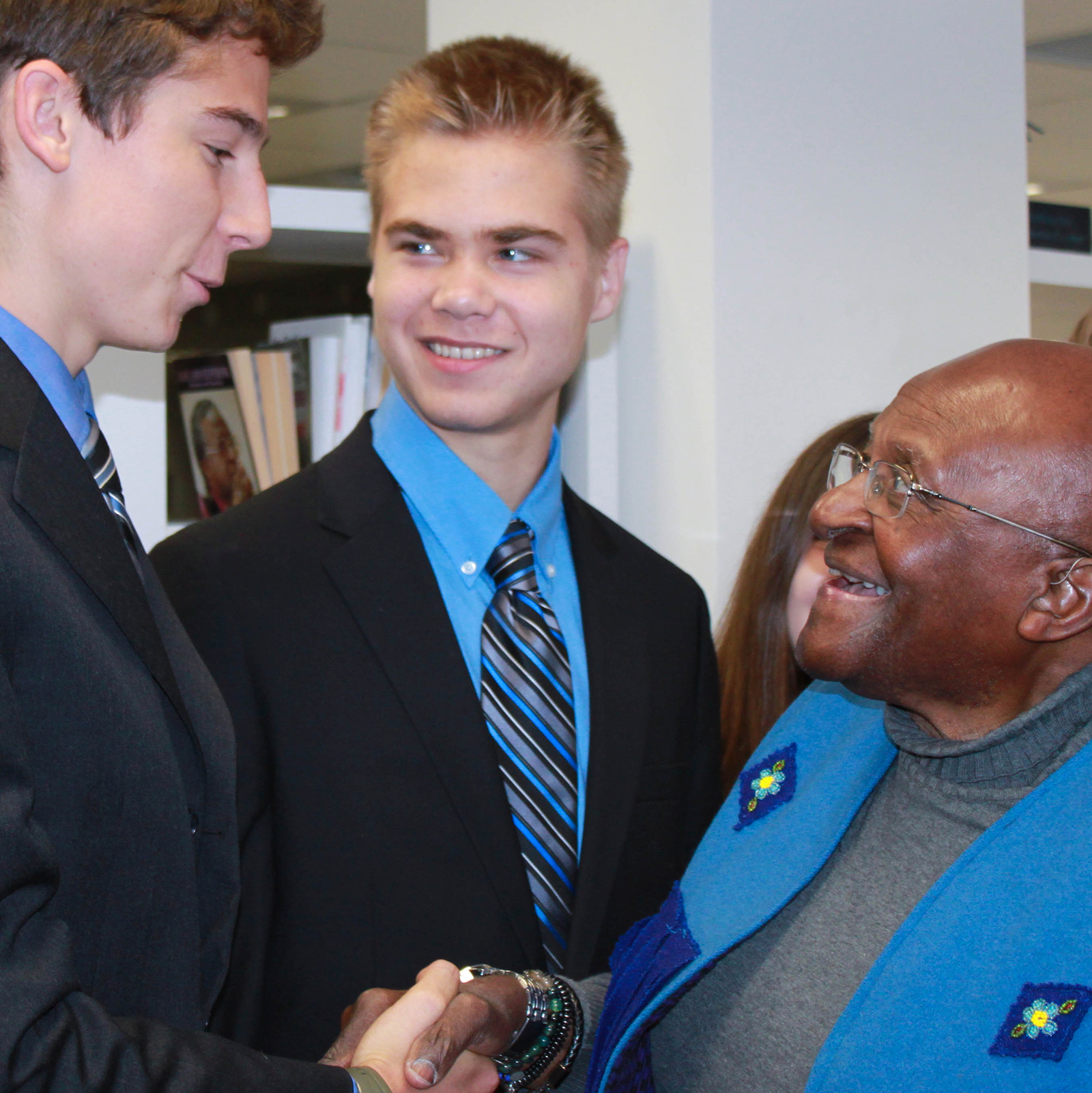 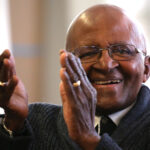 Archbishop Desmond Tutu, a South African Anglican cleric who in 1984 received the Nobel Prize for Peace for his role in the opposition to apartheid in South Africa, passed away on December 26 at age 90. Mount Madonna School (MMS) students first interviewed Tutu during their 2009 learning journey to South Africa and subsequent student groups met with him several times over nearly a decade.

“What attracted me to Archbishop Tutu was his deep and significant participation in the historic miracle of the end of apartheid, and his leadership in the Truth and Reconciliation Commission that sought restorative justice,” said Ward Mailliard, former MMS teacher and founder of the school’s Values in World Thought program. “I took my students to meet him for the first time in 2009 and met him four more times after that. His legacy is that of a man who lived his convictions with kindness, humility, humor and love.”

Archbishop Tutu left an indelible impression on many of the MMS students and faculty who met him. 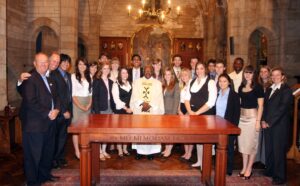 “He was such an inspirational and important person in both South Africa’s history and the world at large,” commented videographer and MMS alumnus Devin Kumar (’06). Kumar has accompanied MMS student groups on numerous Values learning journeys to South Africa, India and Washington, D.C. “He contributed much to the students of MMS by speaking, laughing and singing with us over the years. MMS students’ final visit with Tutu was in 2017 as part of their Ubunye (unity) learning journey. On our last meeting with him, instead of a normal interview, the students gave praise and appreciation to him for all he’s done for us over the years and how his impact on the MMS students has made a difference. We also sang a traditional South African song for him. We will miss him greatly.”

In 2011, junior Blythe Collier (’12) shared this reflection on the students’ Sawubona (I see you) blog: “Pregs Govender and Desmond Tutu both taught us to embrace the whole, whether that is a country, a people, a person or oneself. That’s exactly what the people we’ve met in South Africa have done for us. Wherever we journeyed we were greeted with unquestionable acceptance that we couldn’t help but return.”

“When I think of Archbishop Tutu, I can’t help but think of his good friend the Dalai Lama,” reflected Mailliard. “When we would meet each of them over the years, they would each speak so lovingly of each other’s friendship and have some humorous comment about their dear friend. One of my favorite stories was when Archbishop Tutu spoke of a time when he and the Dalai Lama were speaking and laughing together in a hotel lobby before some public event. When the press arrived, the Archbishop leaned over to the Dalai Lama and said quietly, ‘Now, you must act like a Holy man’ and they both broke into laughter. The greatness of both men rested upon never forgetting themselves as humble human beings, or as I think of their greatness, beings embodied in ordinary people who did extraordinary things and extraordinary people who did ordinary things. It was their willingness to speak to my students and share how they persevered through historic and devastating events, to laugh with us and give radiance to the present moments we shared with them, that meant so much. 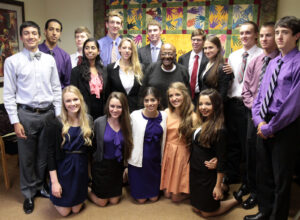 “My other favorite moment was when one of my students asked Archbishop Tutu what it felt like taking the hand of Nelson Mandela and stepping out on the balcony to introduce him to the world as the President of South Africa,” Mailliard continued. “Tutu smiled and said ‘Ooooh! you know, some things you cannot put into words – like holding your first child in your arms.’ Then he said, ‘Do you remember your first kiss?’ and then laughed in his unique way as she blushed. ‘But,’ he said, ‘I will tell you this. At that moment I had a conversation with God and I said, if you want God, you can take me now! This is enough!’ While it is never easy to lose such beacons of faith and humanity, those special moments will inspire us for a lifetime.”

Junior Mara Getz (’10) participated in the MMS students’ first interview with Tutu. In 2009, she shared this reflection on the students’ Ubuntu Project (humanity/ I am because you are) blog: “Our interview with Archbishop Tutu went by in a whirl. I asked him, ‘How did you develop such a deep faith in humankind and have you ever doubted it?’ He began his answer with a story about the Truth and Reconciliation Commission. When he was done he explained that he has such faith in humankind because humans, by their very nature, are good. If they were not they would not be bothered by the suffering of others. I was so moved. Words cannot begin to express how great I was feeling. What an experience. What a trip. What an interview.” 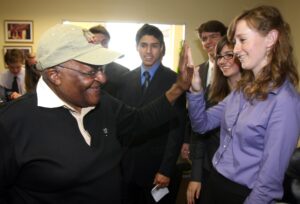 In 2015, junior Holden Smith (’16) reflected in the students’ Uxhumano (connection) blog: “With Archbishop Tutu the aim of a question often goes awry in his answering. When we ask him to talk about his faith he tells us about his favorite prophet Jeremiah. Jeremiah was a reluctant leader and Archbishop Tutu likens this to his own experience during the struggle against apartheid. Then he discusses the responsibility of our generation and the value of education. When he finishes answering he has satisfied a hunger that I never knew I had.

“I start to notice how Tutu’s skin sags with the weight of time and tragedy, but his voice and laughter is touched by a contagious youthfulness,” continued Smith. “He takes a humble sip from a teacup that reads: ‘Everyone grows old, but you don’t have to grow up.’ I notice the Tibetan slippers, wrinkled hands, reckless laugh, and Ubuntu bracelet that amalgamate into a human of true moral character. Ubuntu symbolizes Tutu. In his words it is defined as, ‘a person is a person because of other persons.’ Desmond Tutu is a leader because people follow him without being asked to. I think about those around me: Sophia is a singer because people listen, Julia is a writer because people read, Amy and Haley are teachers because we pay attention, Sielo is a dancer because his friends at LEAP School play the drums, and we are all who we are because someone loves us.” 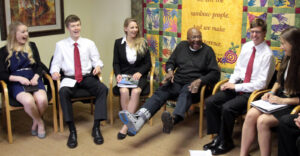 A couple years earlier, in 2013, junior Talia Speaker (’14) reflected in the students’ Sawubona/Ngikhona (I see you/yes, we see you too) blog: “Throughout the interview, Desmond Tutu poured love, hope and wisdom into our eager ears. Almost immediately I developed a deep respect for him. Although we did not always get direct answers to our painstakingly and precisely worded questions, he gave us more than I could have imagined. With each question he took us on a journey through his mind and memory. His genuine, wise and utterly sincere words filled the room like music. In his presence I felt like a child, watching, taking him in with immense admiration and curiosity. He showed me, in a new light, the value of humor and true compassion. He spoke of respect, love, and humanity in ways that transformed complexity into beautifully simple principles of nature. I feel blessed and honored to have met this man who is so full of the good parts of life.”

In 2017, juniors Elias Moreno (’18) and Sienna Clifton (’18) shared in their class’ Ubunye (unity) blog their own impressions of the Archbishop. 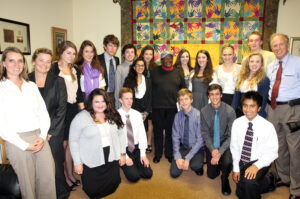 “Looking at his sympathetic eyes and authentic ear-to-ear smile instantly made me feel more confident, and gave me the ability to truly speak from the heart,” acknowledged Moreno. “I told him how inspirational his message of finding joy in even the most difficult circumstances has been to me. I expressed to him that I would try, in all aspects of my life, to see the joy and hope in every situation and that I would encourage others to do the same.”

“As soon as we heard his infectious laughter from down the hallway, I knew what an amazing opportunity this was,” reflected Clifton. “Once he and his wife sat down, our class started to sing, and the smiles never left our faces. It’s hard to completely put into words how I felt. I had an overwhelming sense of joy and pure bliss being there, in front of such an inspirational person, with my class. One profound, yet very simple statement that he made, was that he was considered a great captain because he had a great team. This sentiment made me truly realize the importance of acknowledging others’ gifts, as well as being able to be proud of one’s own.”

Click the following links to see videos of the students’ interactions with Archbishop Tutu: