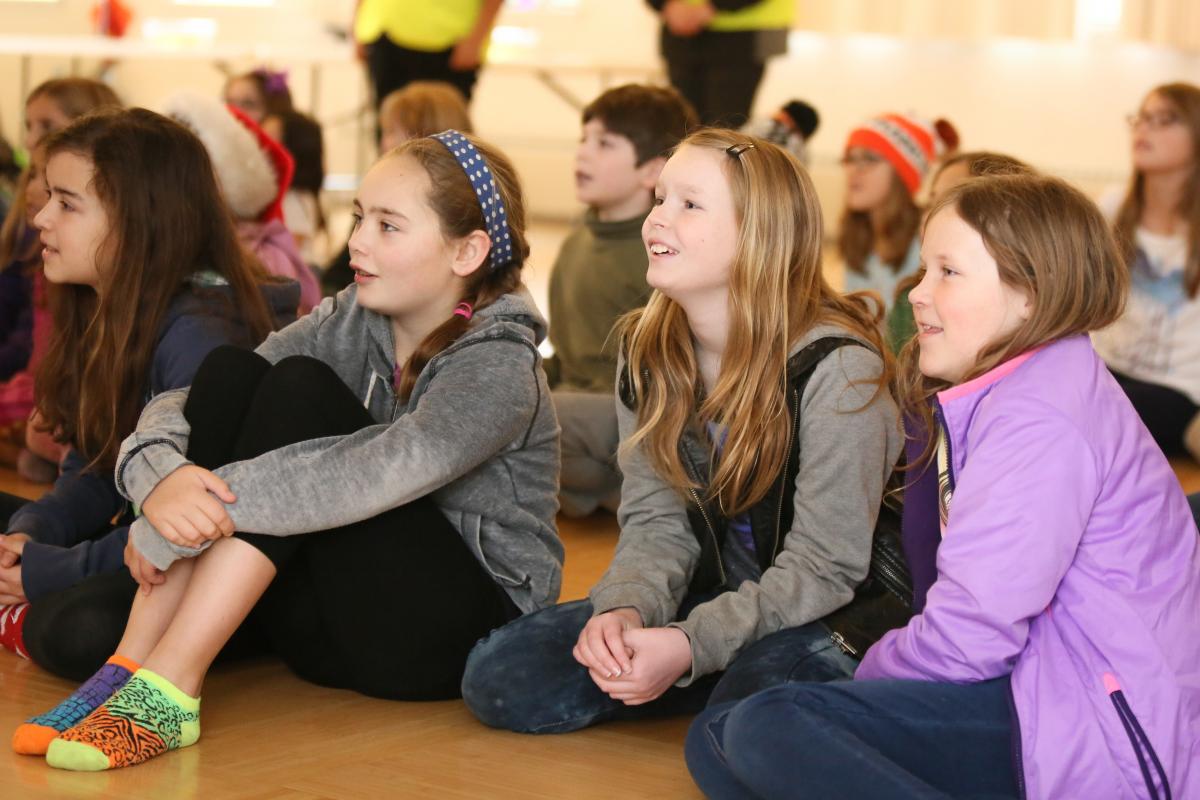 Under a covered walkway at Mount Madonna School (MMS), boys and girls stood alongside one another, their small fingers curled around pieces of braided nylon rope. The rope was precut into specified lengths, with each piece labeled to correlate to the average size of different whale and dolphin species. The children, MMS elementary students, were participating in a simulation designed to give them a visual and physical representation of the comparative sizes of large marine mammals. 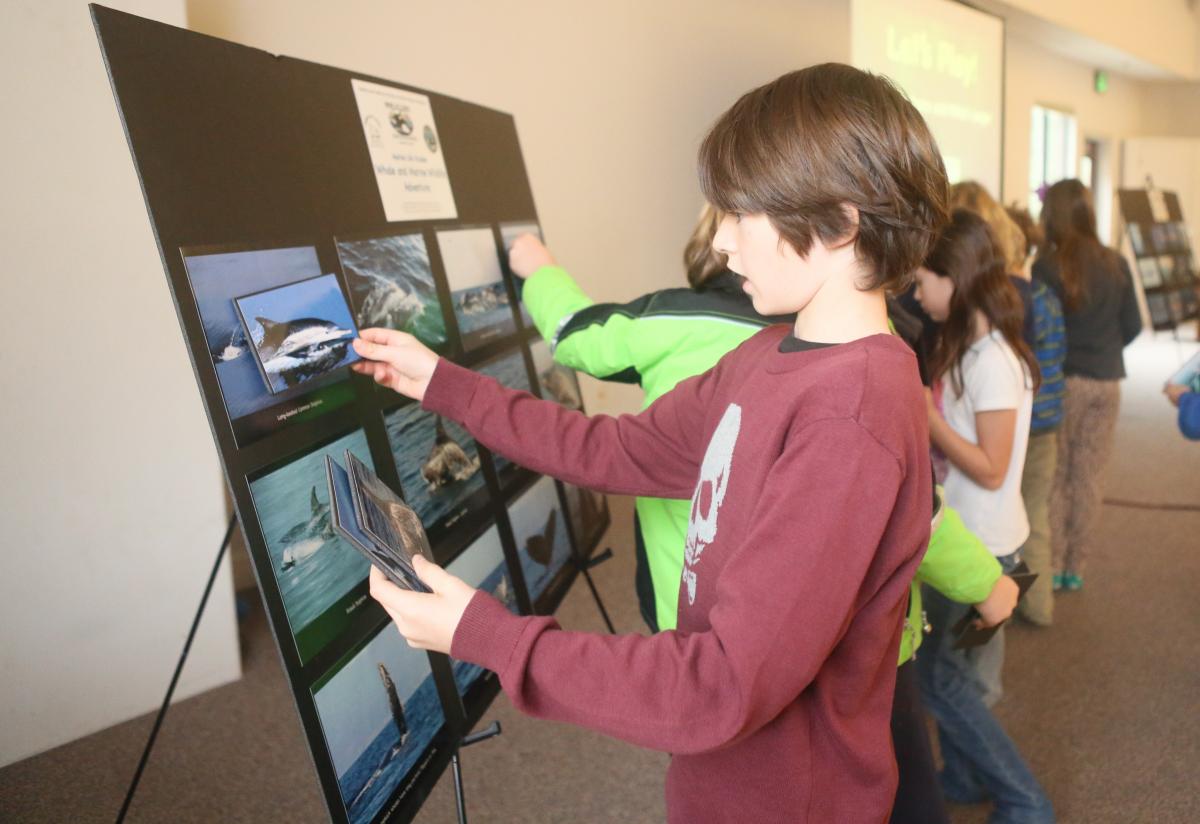 Eleven students held the rope representing the Risso’s dolphin; while 20 students stood spaced about three feet apart to simulate the much larger humpback whale. As the next coil was unwound, the children spread out in approximate five foot intervals, with the rope extending from the MMS Snack Bar to mid-way along a side wall of the school’s library — about 100 feet — to represent a massive blue whale.
‘This whale would be bigger than our whole quad!’ shouted fourth grader Cecily Kelly, in amazed delight. 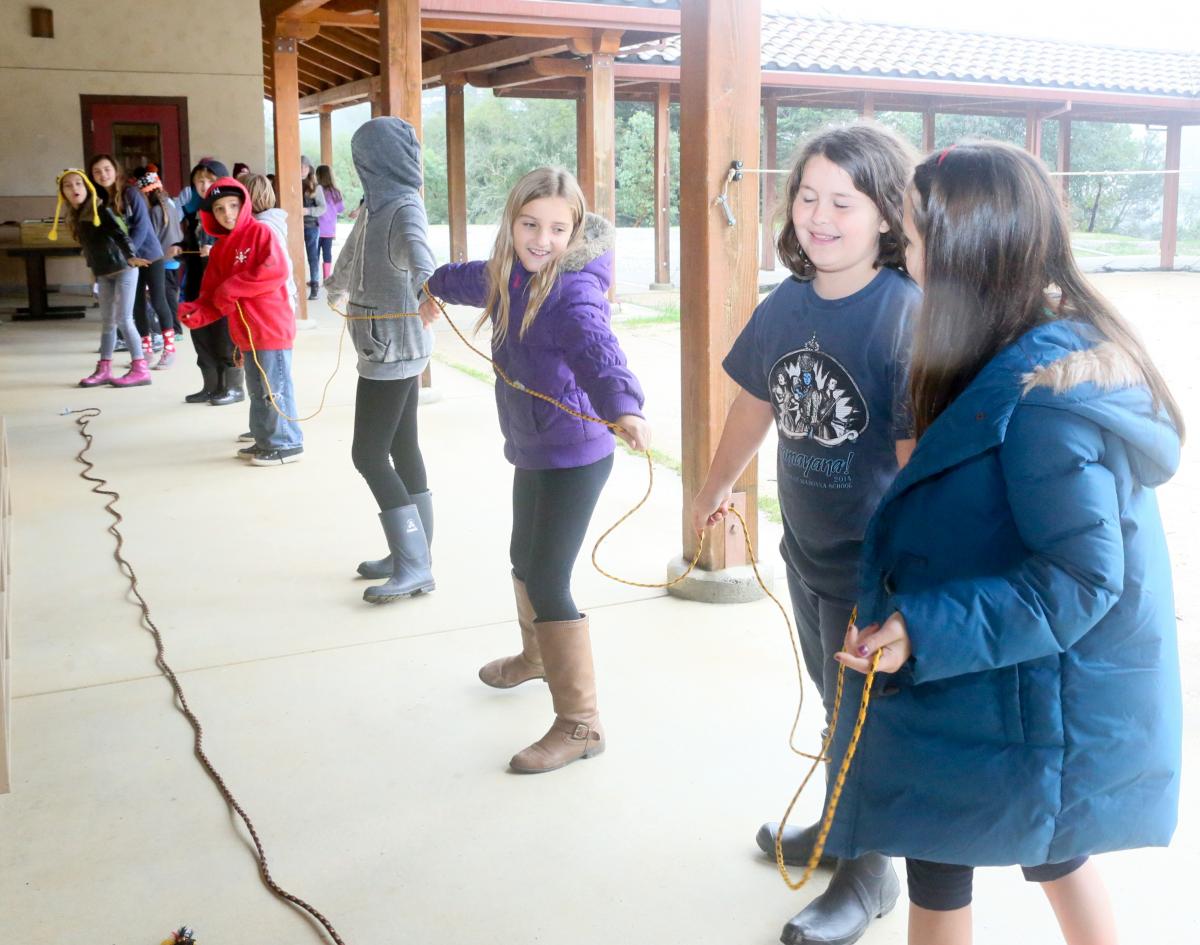 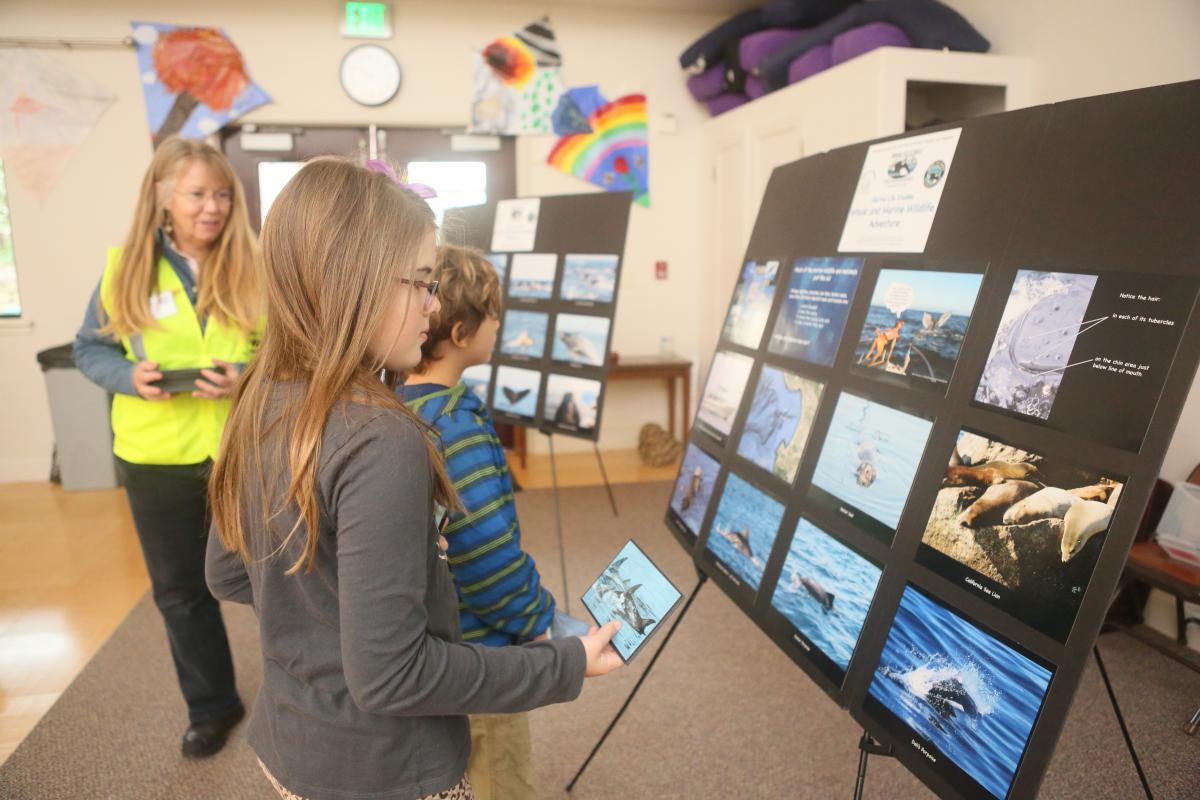 This hands-on activity was part of a presentation by Peggy Stap, founder and executive director of Marine Life Studies (MLS), a research, education and conservation organization. Stap visited MMS to share her knowledge of whales and other marine mammals with third, fourth and fifth grade students. The fifth grade class, led by teachers Jessica Cambell and Nate Rockhold, initiated Stap’s presentation, as learning from guest experts plays a significant role in the annual year long environmental project. This year, the students have chosen to study orcas as their topic animal.
‘The fifth graders selected the orca to study after learning that there are only 77 of the endangered southern resident orcas left, and that those orcas are one of the three types that visit the Monterey Bay,’ explained Cambell. ‘They felt compelled to get involved after seeing media attention given to anti-captivity laws surrounding orcas (especially since the capture of orcas has impacted the southern resident orcas the hardest). They were interested to learn how smart orcas are, how endangered they are, and that they have close-knit families. 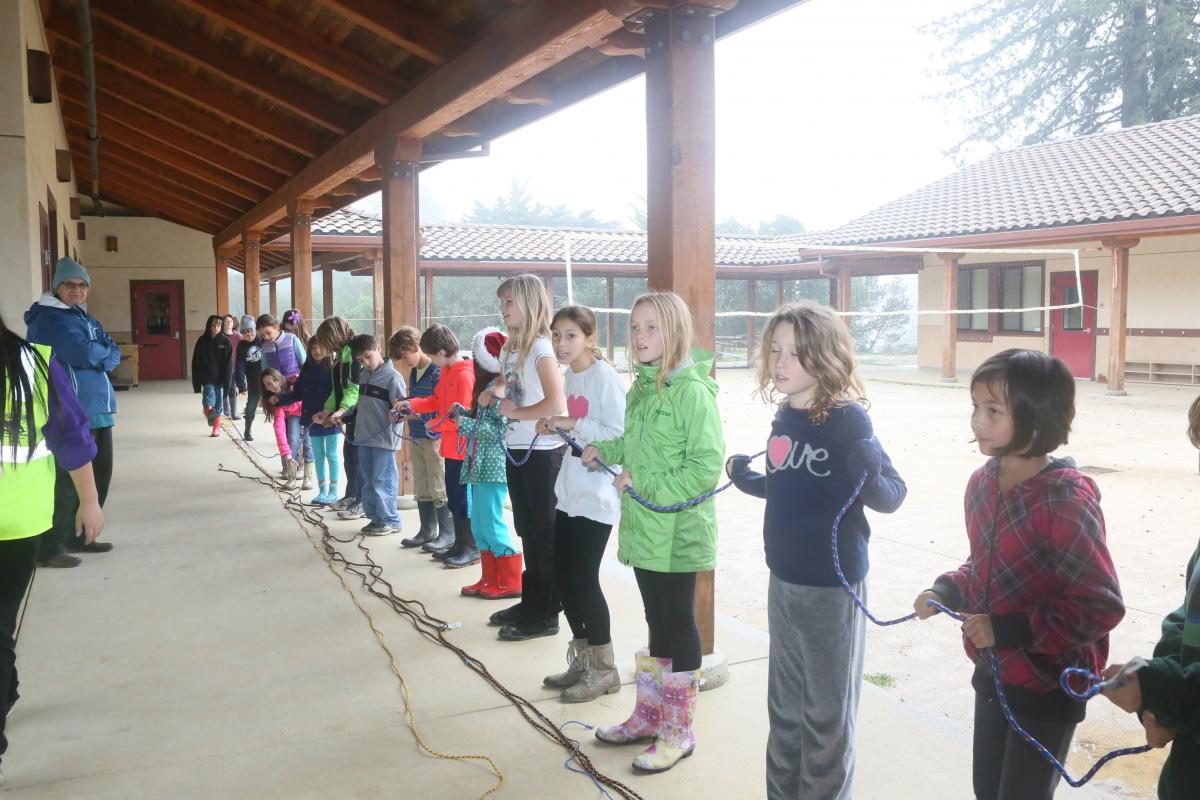 ‘We invited Peggy to present because she has first-hand experience working with orcas and is enthusiastic about partnering with our students to educate the public about how human actions, such as everyday water use or the use of household chemicals has an immediate and powerful impact on the orcas.’ 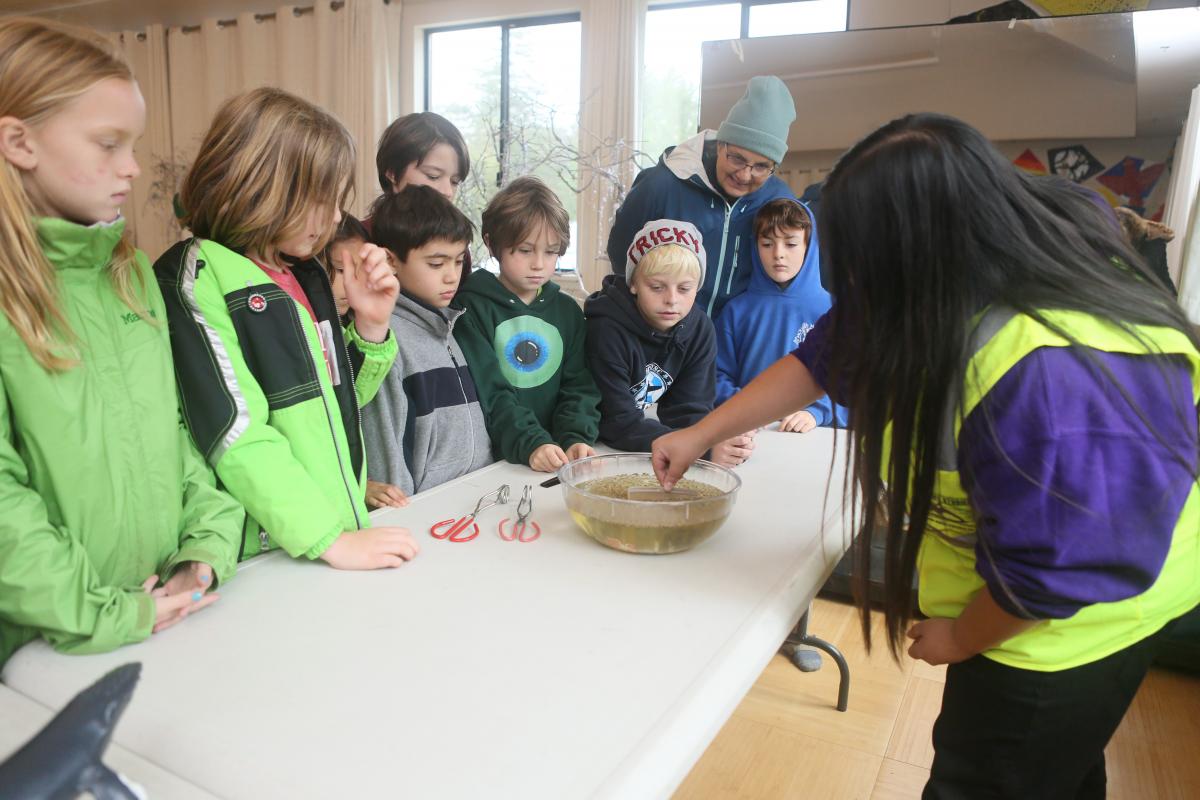 Assisted by MLS volunteers, Meri Bautch, a marine artist, and Stephanie Marcos, a student at California State University, Monterey Bay, Stap shared photographs of numerous marine mammal species found in the Monterey Bay National Marine Sanctuary and along the central California coast, as well as stories of her experiences volunteering with the Whale Entanglement Team, a group which works to free whales trapped in fishing line and other environmental debris.
Students learned that some whale and dolphin species, including orcas, are toothed, while other species, including grays, have baleen, a filter-feeding system inside their mouth. Inside the classroom, students crowded around bowls filled with water, herbs to represent krill and submerged toy sea animals, to take turns in an activity demonstrating feeding behavior differences for toothed and baleen whales. 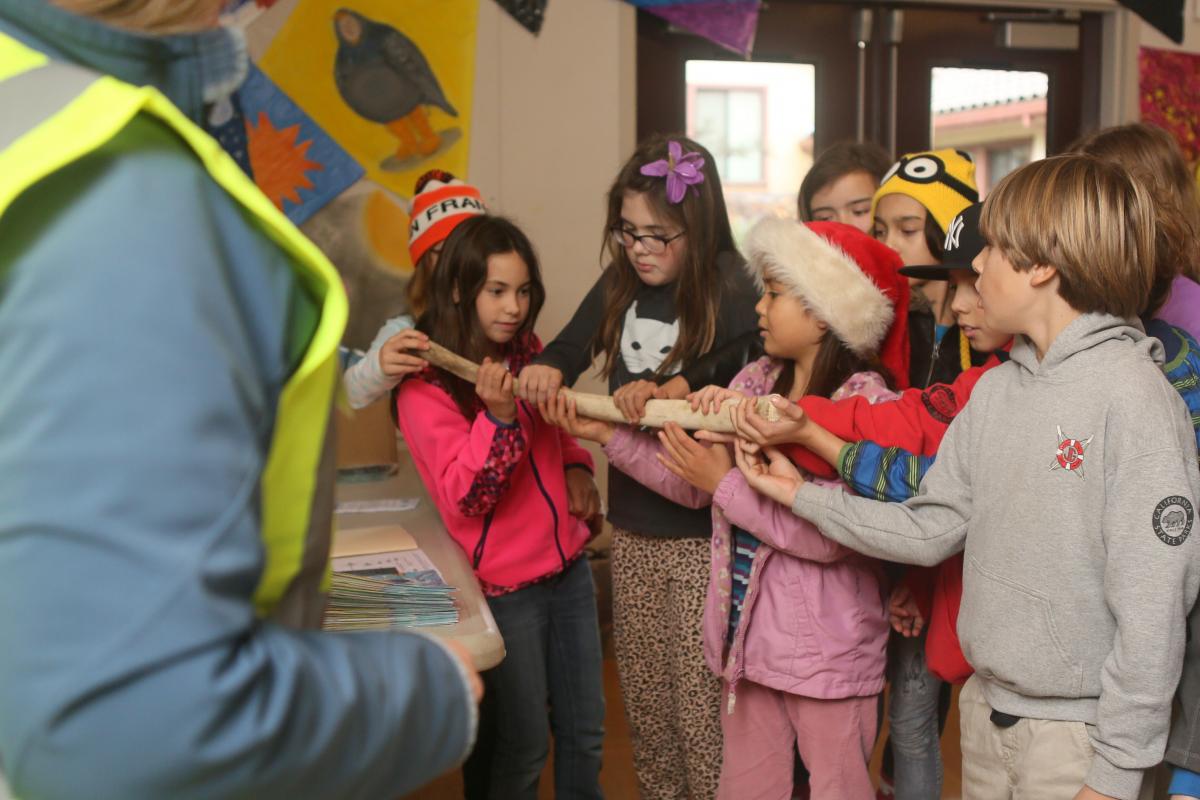 ‘Blue whales, for instance, primarily only eat krill,’ Stap told the students. ‘While toothed whales, like the orca, (the largest dolphin in the toothed whale family) use echolocation to find their food. They don’t use their teeth to chew, but to grasp and swallow.’
Nearby, several students gathered around a hefty, dark brown piece of material, slightly resembling a piece of a palm tree trunk. 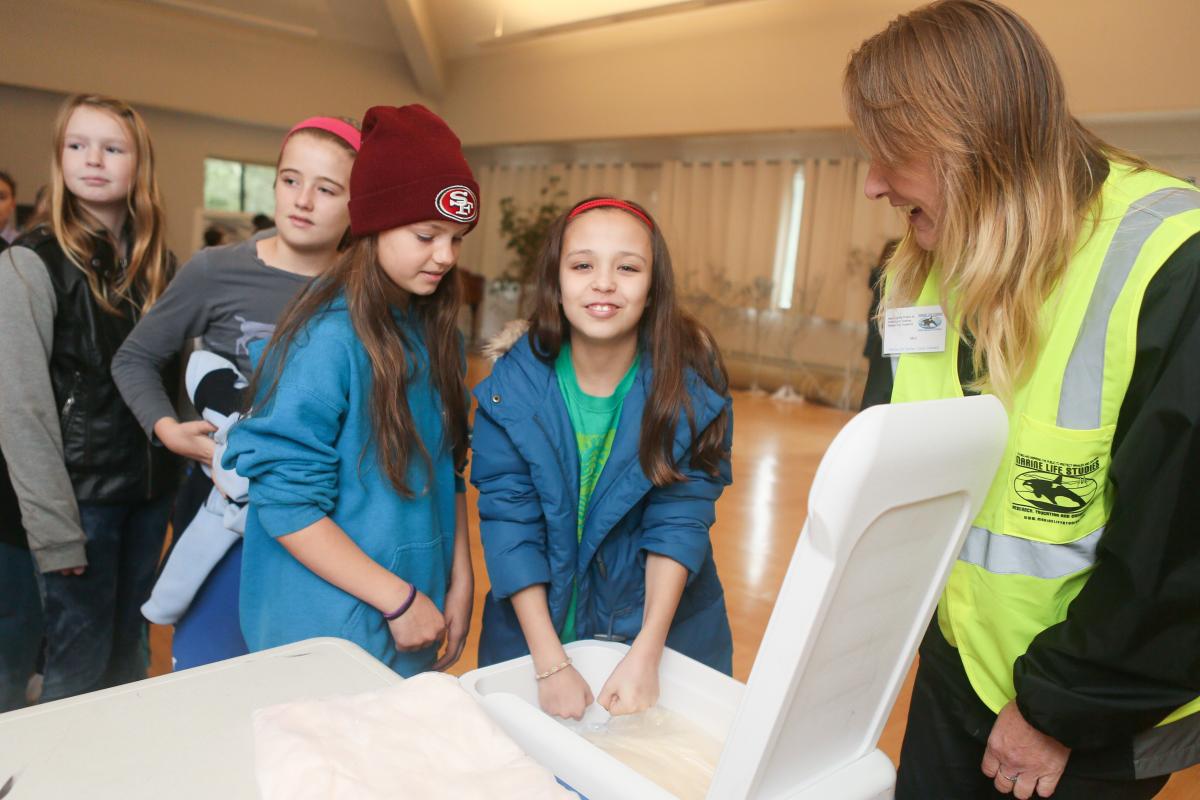 ‘What is it’ a student asked, running his fingers across the material’s rough, fibrous surface.
‘It’s baleen and it works kind of like a tooth,’ explained fifth grader Kayla Goldstein.
‘The whale uses it to eat, and their food, the krill, can’t get through it,’ added classmate Grace Timan.
The material was in fact baleen, and a sizable sample that Stap brought for students to observe touch — or event to try and hold — though it weighed 30-plus pounds!
‘Imagine,’ Stap told the students, ‘this is just 22 plates, and baleen whales can have up to 270 to 400 plates on their upper jaws on each side of their mouth!’ 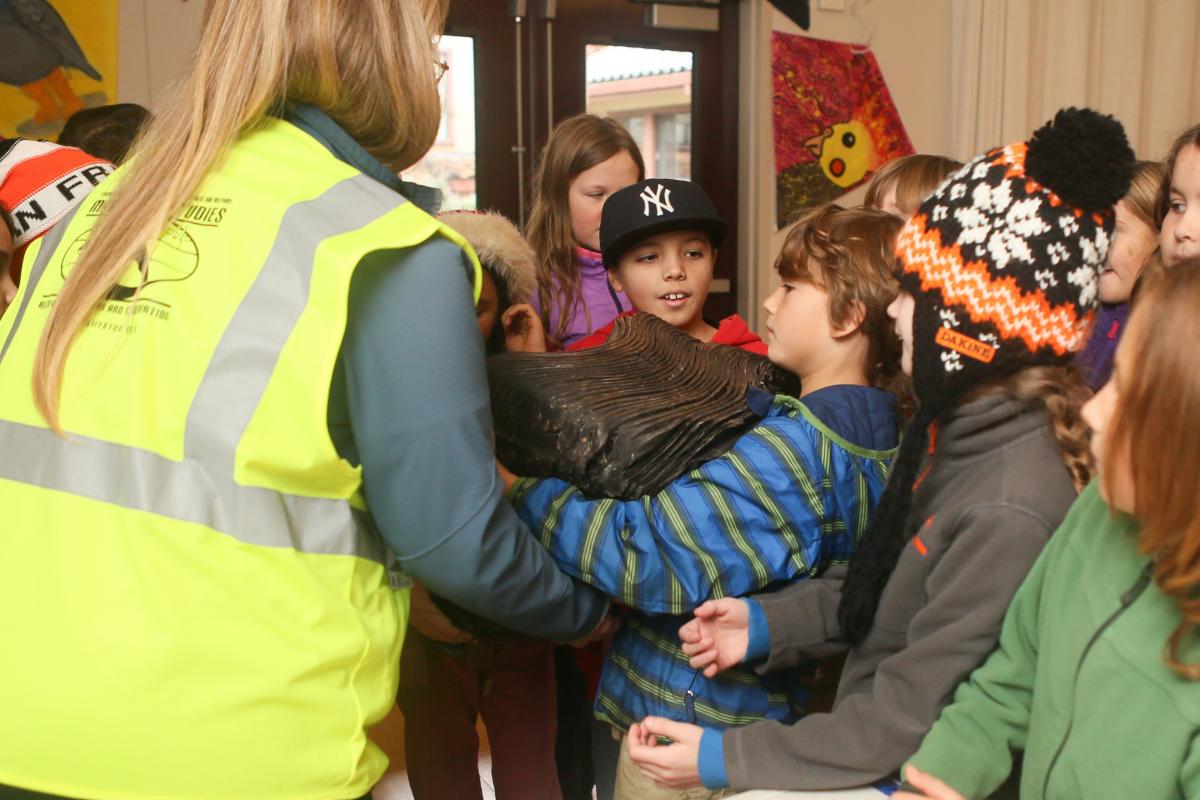 ‘How big are the krill’ asked another student.
‘Tiny,’ answered Stap. ‘The size of a paperclip. The whales have to feed on huge quantities of krill because they are such massive creatures.’
‘I was interested to learn that the biggest whales, with their huge appetites, fill up on one of the smallest animals, millions of tiny krill,’ commented fifth grader Summer Howley. 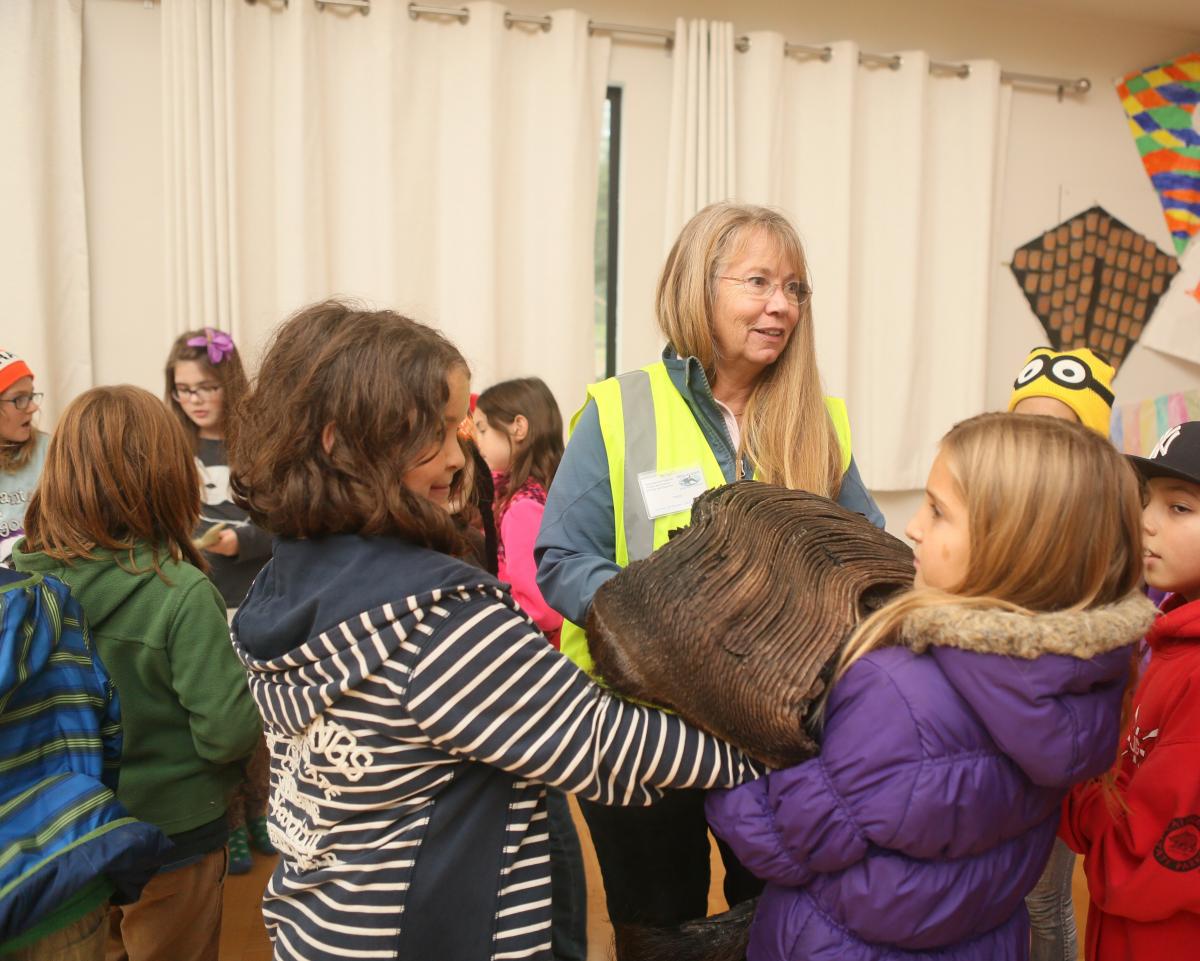 ‘What worries me,’ Stap shared with the students and their teachers, ‘is that in Japan and other countries, they have begun harvesting krill for its oil. It’s supposed to be even more beneficial for humans than fish oil. But krill are the basis for our food chain; they are where it all starts, and we can’t know yet what impact this activity will ultimately have.’
‘What is this’ asked fifth grader Maddie Erbe, holding up a 2 ‘ foot-long curved bone.
‘It’s a rib bone from a gray whale calf,’ said Stap. Holding the bone near her midsection, Erbe and several classmates looked at each other in surprise. 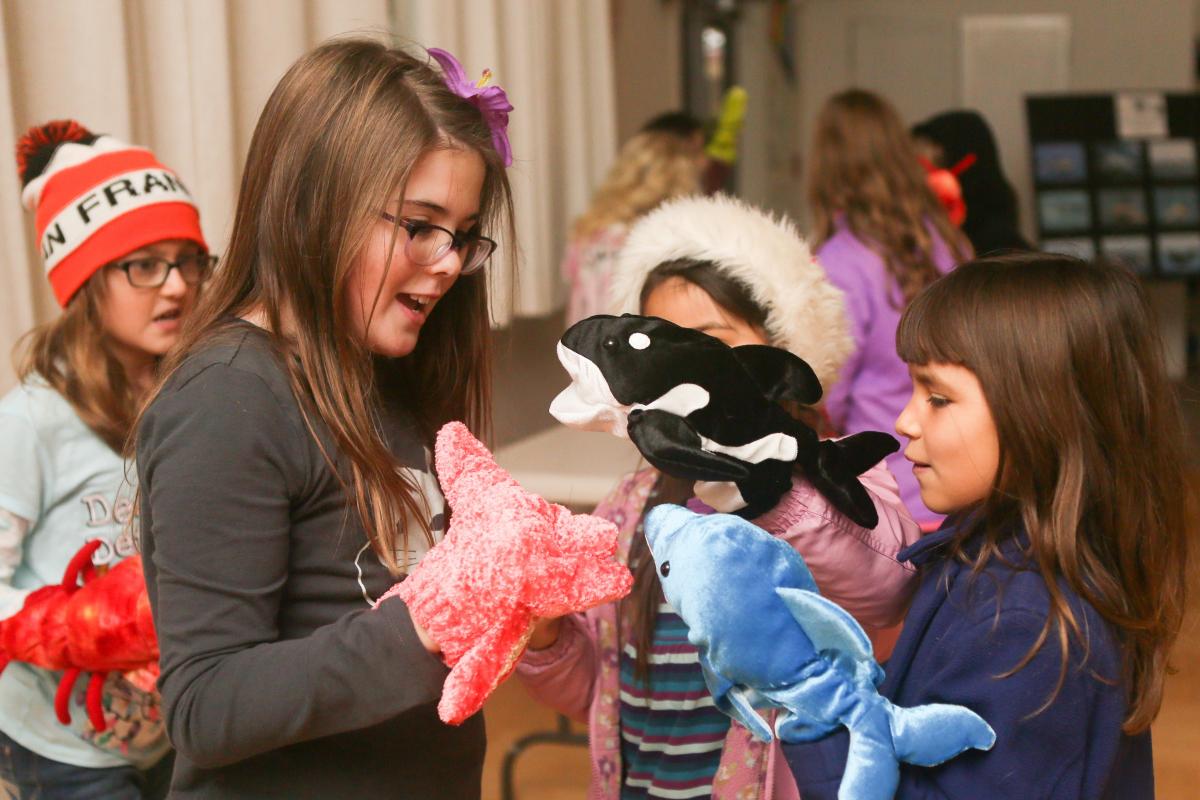 ‘It’s so big,’ a boy commented. ‘It reaches across half my body!’
‘How long does a blue whale live’ asked fourth grader Sam Kaplan.
‘We don’t know for sure,’ answered Stap. ‘We believe they can live for 90 or 100 years or more.’ She told students that a bowhead whale carcass recovered in the Arctic, showed evidence of being 230 years old!
Students sat quietly and hardly moved when an audio recording of singing humpbacks filled the room, seemingly engrossed in the whales’ soulful song. 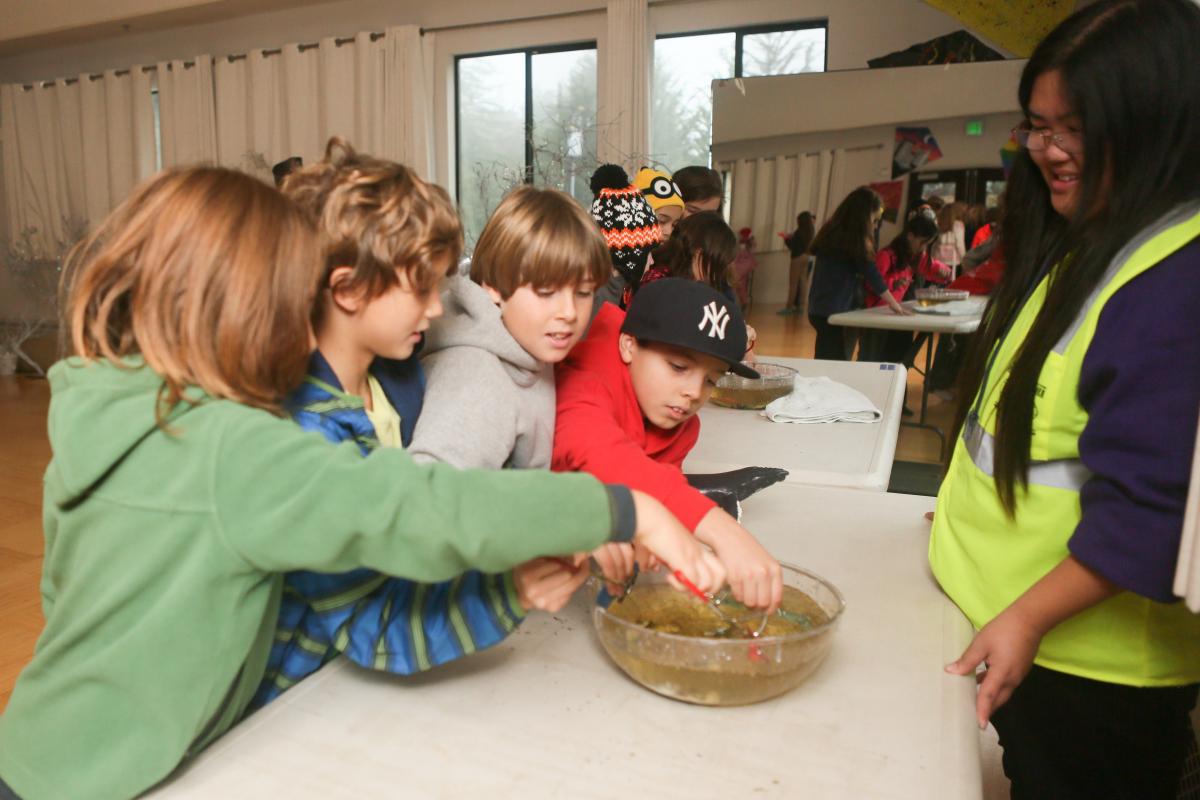 ‘If they sing to communicate, what are they saying’ asked a fourth grade boy, when the recording finished playing.
‘Scientists don’t know for sure,’ said Stap. ‘We do know that throughout the northern Pacific, humpback whales, for example, change their song each year and all the male whales learn and sing the same new song. We think this happens while they are out in their feeding ground, but it’s still not entirely understood how they communicate this new song to each other.
‘