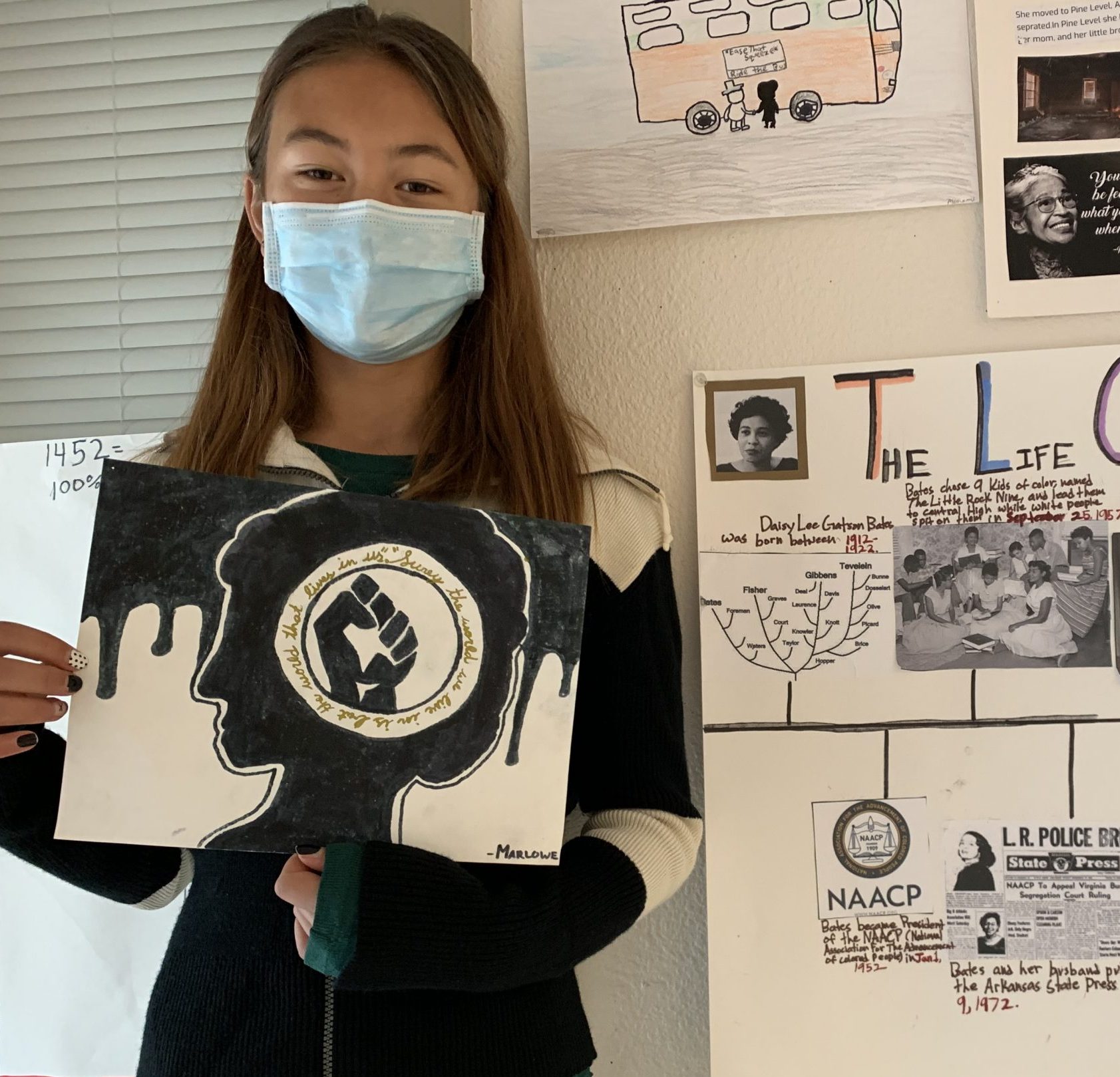 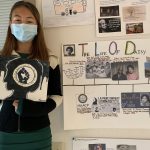 From civil rights champions who soar into space and shatter glass ceilings, to preserving indigenous traditions and advocating for farm workers; from conserving Earth’s precious resources to improving access to education, in recent months Mount Madonna School (MMS) lower school students have been learning a lot about many individuals who have and are working to make the world a better place.

On April 30 at 10:00am MMS will spotlight its themed cultural awareness performances with Champions for Social Justice, a culminating presentation of several months of in-depth learning by preschool through fifth grade students. In lieu of being able to gather in-person to watch students perform, the presentation will be pre-recorded and shared via Zoom.

“Cultural Awareness is an important tradition in the lower school where our students delve deep into exploring and learning about different cultures widening their awareness of the world beyond their horizon,” shared Director of Lower School Kami Pacheco.

“This age-appropriate, cultural awareness unit is especially important for our students to help enrich and inform our concept of global citizenship,” continued Pacheco. “Much in the way that MMS high school students hold a public presentation following their return from international learning journeys, the lower school students’ presentation is the symbolic ‘return’ from their cultural learning journey and is intended to be witnessed by the MMS community.”

Following are highlights of the students’ themed studies and learning. 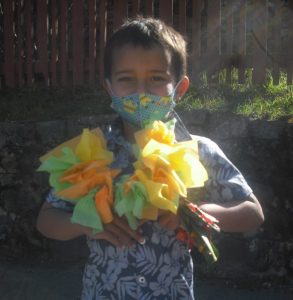 “Preschool students built volcanoes and danced hula,” said teacher Danielle Barr. “We read a lot of books about traditional stories of Hawaii. The students explored with hands-on lessons on land and water formations, including islands and waterfalls. We discussed geography and the geologic activity by which the islands were formed, Hawaiian food, habitat and traditions.”

For their Cultural Awareness presentation, preschool students are performing “Ho’oponopono,” a Hawaiian prayer for healing and forgiveness.

“The Hawaiian culture renaissance that started in the 1970s and continues today is definitely a success story in the preservation of Native American culture,” commented teacher Hema Walker. “The children are learning about some of the champions who have worked hard to conserve the Hawaiian language and culture, including the last Princess of Hawaii, Princess Ka’iulani, who advocated for Hawaii’s independence in the 19th century; Edith Kanaka’ole and Mary Kawena Puku’I, two “Kumus” or hula teachers who worked with children to pass on this Hawaiian dance tradition.”

For the presentation, students will sing and perform a hula dance to the song “He Nani Ke Ao Nei,” or “This Beautiful World,” by Puku’l; who also wrote the definitive Hawaiian dictionary. 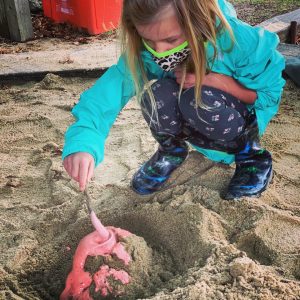 “We were delighted to welcome special guest (and former MMS dance teacher), Kumu Lorraine Kinnamon, into our classroom,” said Walker. “She sang to the children in the Hawaiian language, read them a story about different Hawaiian musical instruments and demonstrated how each one is played. She showed us that even shells and rocks can be musical instruments used in hula. The children were introduced to the ancient “Kahiko” style of hula, which I performed as Kumu Lorraine played along with a dried out gourd instrument called the ipu. Then the children enjoyed dancing along to some Hawaiian songs, and later the children took this experience deeper by reflecting on it in their drawing journals.”

“My favorite thing was the hula,” said kindergartner Harper Sebok. “The hardest part was to try to follow along. There’s so many ways to do hula!”

“We got to do hula and I love it!” agreed classmate Luka LeClair-Bonacich. “We also made Hawaiian Butter Mochi and all kinds of cool stuff to eat.” 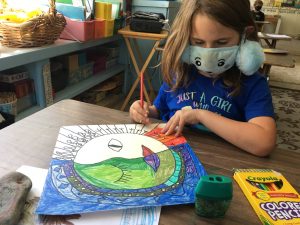 First grade students have been learning about Native American values. Students will perform “The Earth is Our Mother,” a traditional chant with drum accompaniment, and a skit focused on the words of Chief Seattle.

Students created presentations on a relevant topic of interest pertaining to their Native American focus. Classmates are involved in the assessment process, sharing feedback, including comments and compliments, with their peers. Each student selected a specific type of Native American dwelling and will share information about the tribe, its traditions, weather in the region inhabited by the tribe, and its struggles past and present.

“We have so much to learn from one another,” observed teacher Cassia Laffin. “In first grade, we are all teachers!”

“What I learned is that Chief Seattle loved this land and he loved animals like I do,” said first grader Rhiannon Aron-May.

“I liked learning about Chief Seattle because I might be part Native American too”, said classmate Orion Wolfe.” 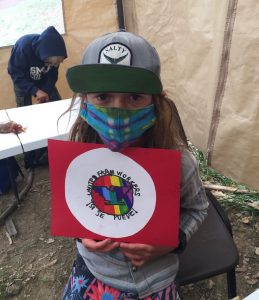 Advocacy for farm workers’ is the focus of second grade learning.

“We are learning about the peaceful protests of farm workers led by César Chávez and Dolores Huerta,” shared teacher Prema Gammons. “Throughout the school year students have studied farms and food that grows in our local area and together we are connecting those lessons to the work of the United Farm Workers (UFW) organization, which continues to advocate for the rights of farm workers.”

Second grade students will sing “La Peregrinacíon,” the UFW song, recite a poem they co-wrote together, and share facts about the two leaders.

“I learned that some farmworkers did not have enough money to buy food, medicine or shoes for themselves or their children,” said student Dahlia Bell.

“César Chávez started a march for farm workers to be equal and he had to be brave,” commented classmate Oceana Harris. 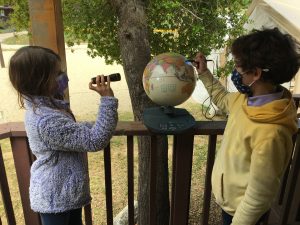 Physician and astronaut Mae C. Jemison – the first African American woman in space – is the focus of third grade studies. Students will share their original poems honoring Jemison and sing a song about space.

“On June 4, 1987, Mae Jemison became the first African American woman to be admitted into NASA’s astronaut training program,” shared teacher Natalie Turner. “On September 12, 1992, Jemison finally flew into space with six other astronauts aboard the Endeavour on mission STS47, becoming the first African American woman in space. In recognition of her accomplishments, Jemison has received several awards and honorary doctorates.

”I think it’s interesting that Mae Jemison decided to share her story by writing a book,” commented student Jacquelyn Piccardo. “She is an inspiration for kids to do something that you love and that it’s okay to follow your dreams.”

“It’s fun to learn about other people,” said classmate Narayan Aron-May. “As you think about your future, it helps you to feel inspired.” 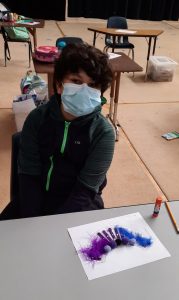 In fourth grade, students have studied and will present on the late Supreme Court Justice Ruth Bader Ginsburg (RBG).

“Ruth Bader Ginsburg has not only been a champion for social justice and equality for women, she has also been a powerful and outspoken member of the Supreme Court,” commented teacher Nick Cabassa. “With her recent passing and the circumstances surrounding her replacement on the Court, I felt that this was a great opportunity to have my class learn more about her. Through reading, watching documentaries, and researching her quotes, students have gained a better understanding of who she really was and what she stood for.”

Students will each share a Ginsburg quote they’ve analyzed, along with their response detailing what they think the quote means. The class will also perform the song “I’ll Fight” by Jennifer Hudson.

“RBG was brave because she fought for women’s rights at a time when men were in charge of everything,” commented student Giavanna Iacocca.

“Ruth Bader Ginsburg worked very hard to be a lawyer and to shape this country into what it is today,” commented classmate River Brinton. “She didn’t just work for women, but she worked for everyone to have the same rights.”

In fifth grade, each student chose a social justice leader that they wanted to learn more about, wrote research papers, created timelines of their leader’s life and career and art pieces to honor them. Students wrote a one-minute monologue in first person to share as part of their cultural awareness presentation, and will perform the song “We Shall Overcome.”

“I chose Malala Yousafzi because she likes school and I like school,” said Sera Krawetz. “She helps a lot of girls around the world which I think is pretty cool.” 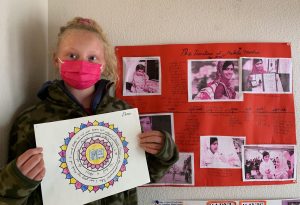 Deja Orozco said she studied Ruth Bader Ginsberg because of Ginsburg’s support for women’s rights. “I learned that when she was in college, she was harassed for just being a woman; because she ‘took a man’s spot’,” said Orozco.

“I chose Allie Young because she is Native American and you don’t hear about them as leaders,” shared Sophia Krawetz. “She’s really connected to her heritage and is fighting for voting, so that her ancestors’ fight is honored and her people are listened to.” 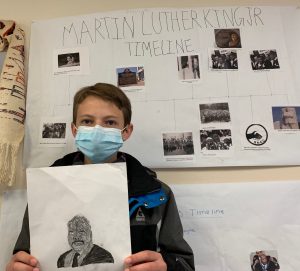 that Martinez raps, as does Woodrow. “He is 19 now, and I was shocked to learn that he started being an activist when he was six years old,” said Woodrow. “He has already done so much at such a young age!”

Student Rory Kayne focused on the late civil rights activist and Congressman John Lewis. “I heard about him from my parents and I wanted to learn more,” said Kayne. “I thought it was so cool that he used to practice preaching to his chickens, and he wasn’t afraid to fight back against things that were wrong.”

Classmate Sasha Kazarian studied the late Ciara Taylor, a human rights and racial equality advocate. “She was a young leader who died for what she fought for,” commented Kazarian.

“I chose Martin Luther King, Jr. because he is the first person that comes to mind when I think of a leader,” said student Henry Anderson. “I am amazed that he fought most of his life for equal rights.” 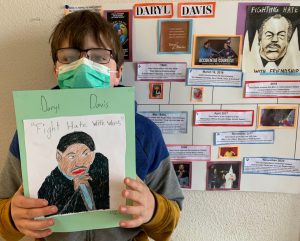 “I picked Rosa Parks because I wanted to learn more about her beyond the little bits I hear in history,” shared classmate Minami Wu. “I was surprised to learn how long she lived, given all the threats she faced for her protest.”

Fifth grader Aiden Powers said he chose Daryl Davis. “I started to look up leaders and found a video about Davis and his fight to change the minds of people who are members of the Ku Klux Klan. From him I learned that words are more powerful than people realize. I also emailed him for information about my report and he replied. He was so humbled that I thought he was a social justice leader.”

“Through this experience students were able to learn about various issues that others are passionate about and have worked or are working hard to create positive change,” commented teacher Jessica Cambell. “In writing their monologues, students had to utilize their research papers to try and determine what they thought their leader would say was the most important thing to communicate – what were they fighting for? Why were they passionate about it? Why should we care? Through the research and oral Cultural Awareness presentations, students were able to learn about some of the ways others are working to improve peoples’ lives and make the world a better place.”