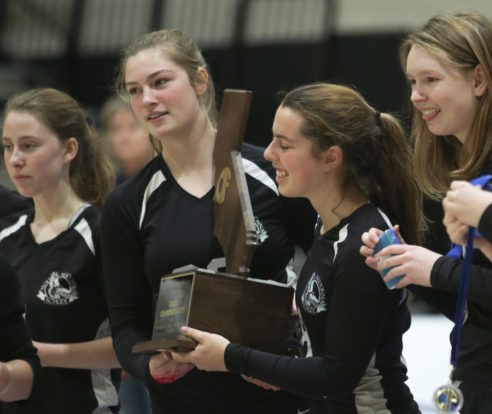 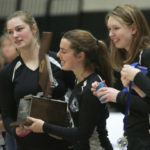 The Pajaronian, 11/27/2019, “Girls volleyball: Hawks soar to victory against Wildcats for CIF D-V title,” photos and story by Juan Reyes.

ORANGE—It was the battle of David versus Goliath. The final showdown for the CIF Division V State Championship.

Mount Madonna, the small school nestled deep in the forest made up of 63 high school students, against University High, a juggernaut with about 1,500 students from the westside of Los Angeles.

The Wildcats student body section showed up with a cheering squad, a drumbeat core and a large pep squad to support the “home team” in a mach they were hoping would end with for a postgame celebration.

Senior Savannah Campbell had three aces and led the Hawks with 43 assists. She finished with a team-high 133 assists in the CIF NorCal playoffs and state championship game.

The Hawks had a small, yet mighty crowd cheering them on and Cambell said they were able to feed off of them throughout the match.

“It’s crazy that we did this and we’ve seen that (2007 state title) banner every single day in our gym and now we’ll have our names on there,” Cambell said.

It’s the second CIF State Championship for the Hawks and first since 2007 under then coach Gabrielle Houston.