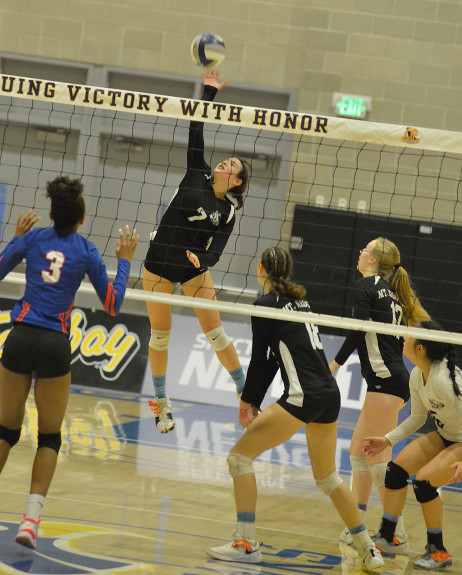 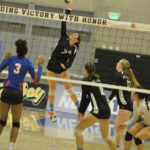 ORANGE — Mount Madonna, the little school that could … again.

The Hawks, boasting a student body of 63, took down an opponent with an enrollment 25 times larger than their own Friday to claim their second California Interscholastic Federation Division V girls volleyball state title in school history. 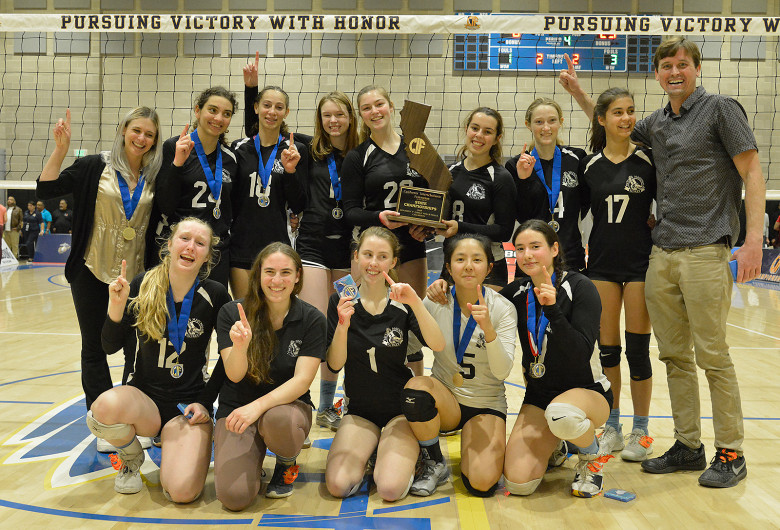 Senior outside hitter Paola Jacobs belted 25 kills to lead the Hawks to a 25-15, 20-25, 25-22, 25-8 victory over University High of Los Angeles and the celebration was on at Santiago Canyon College.

After the final point was recorded, players on the Hawks’ bench stormed the court to join their jubilant teammates, forming a celebrating mass of joyous energy.

“We know the postseason is our time to shine,” said Hawks’ setter Savannah Cambell, who dished for 41 assists and added five kills and five aces. “And we did. They’re a D-II team and we beat them. I’m just so happy.”

University is a large school, with 1,658 students. It brought a drum line, cheerleaders and a dance squad — a collection nearly matching the Hawks’ enrollment — and that’s not counting its cheering section. 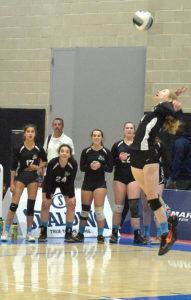 “We had 12 to 15 kids come down here from school,” Cambell said. “We don’t have a band. We don’t have cheerleaders. To compete against that is crazy. But we fed off our crowd.”

The key to the victory was the Hawks’ cohesion and communication, tough serving that produced points and kept University out of system, fierce defense and an efficient multi-pronged offense.

“In the back row, we trust each other and we talk to each other a lot,” Dasbach-Prisk said. “We executed well tonight.”

“Tonight we really used our outsides and our middles,” Cambell said. “We shared that. Our right side Mariah (Cohen) really brought it. Paola is our go-to hitter, but we have others. Liana is really good and smart and knows where to put it. And we have Eve and Kahlan (Tervalon).”

University, only the third Los Angeles City Section team to reach a state final in the last 40 years, was led by Taadi Henderson with 12 kills and Natalie Fernandez with eight kills.

“It feels really good to win,” Jacobs said. “We were definitely a bit nervous. In the fourth set, we were on fire.”

Mount Madonna trailed in the opening set 10-7 and then tough serving and great defense carried them to a runaway 25-15 win. Henderson led University in the second set. 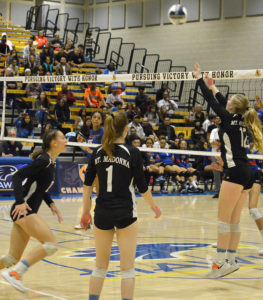 The fourth set was an avalanche and a Hawks’ volleyball display at its finest. After a side out, Kitchel stepped to the service line and served 11 points, as Mount Madonna rocketed out to a 12-0 lead. University burned both their time outs, but could not slow the onslaught. And the Hawks still were not satisfied.

The margin grew to 20-4 and the University drum line was quieted.

“Congrats to Mount Madonna,” University coach Emilio Alvarado said. “They played an incredible game today. When we didn’t serve receive well, that was a tough pill to swallow. They served tough. In the fourth set, they grabbed hold and didn’t let it go.” 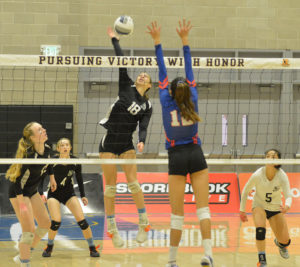 “I knew they could do it,” said Mitchell, a star player on the Hawks’ first state championship team. “Finally in the fourth set, we played our game. We were beating ourselves and we needed to find a little calm. We began to control the ball on our side. I talked to the team about staying in the present. We handled the crowd.”

Mitchell made the all-tournament team in 2007. Now she’s part of another Mount Madonna title in a different role. And her players are part of it.

“We see that banner (from the 2007 team) in our gym every day,” Cambell said. “Now we’ll have our names up there. The little school that could. And did.”