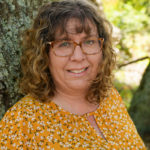 Mount Madonna School (MMS) teacher Tiffany Wayne, Ph.D., has been selected to deliver the keynote speech at an event celebrating International Women’s Day on March 8. Wayne, who teaches high school social studies and English, was nominated for this honor by one of her MMS students.

The event, hosted by the YWCA of Watsonville, takes place from 1:00-6:00pm at 340 East Beach Street in Watsonville. Wayne, and Watsonville Mayor Rebecca Garcia, are scheduled to speak from 3:30-4:00pm.

“I am honored that Grace Timan, a student in my 10th grade U.S. History class, nominated me to speak at the YWCA International Women’s Day. I’m proud of Grace for her community involvement with the YWCA Youth Committee and she told me that, when the group expressed a need for someone to speak about the centennial of American women’s suffrage, she thought of me. In addition to our in-class conversations about women’s history, Grace knew that, for the past year, I have been writing a book on the 100-year anniversary of the ratification of the Nineteenth Amendment to the U.S. Constitution. 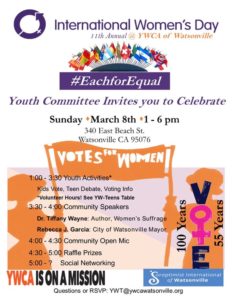 “For this event I plan to focus on how the fight for women’s suffrage in the early 20th century grew out of and was connected to larger international equality movements for worker’s rights, civil rights, children’s rights, and immigrant rights,” Wayne continued. “I want to highlight how the vote was not solely about the principle of women’s equality, but was fought for by women activists across these other movements who needed a voice in order to make change. I hope to inspire young people to use these rights that were fought for so long ago and to use their voices in our democracy!”

“Tiffany is an accomplished woman, local teacher and feminist,” said Timan, “and a great role model for me and other girls.”