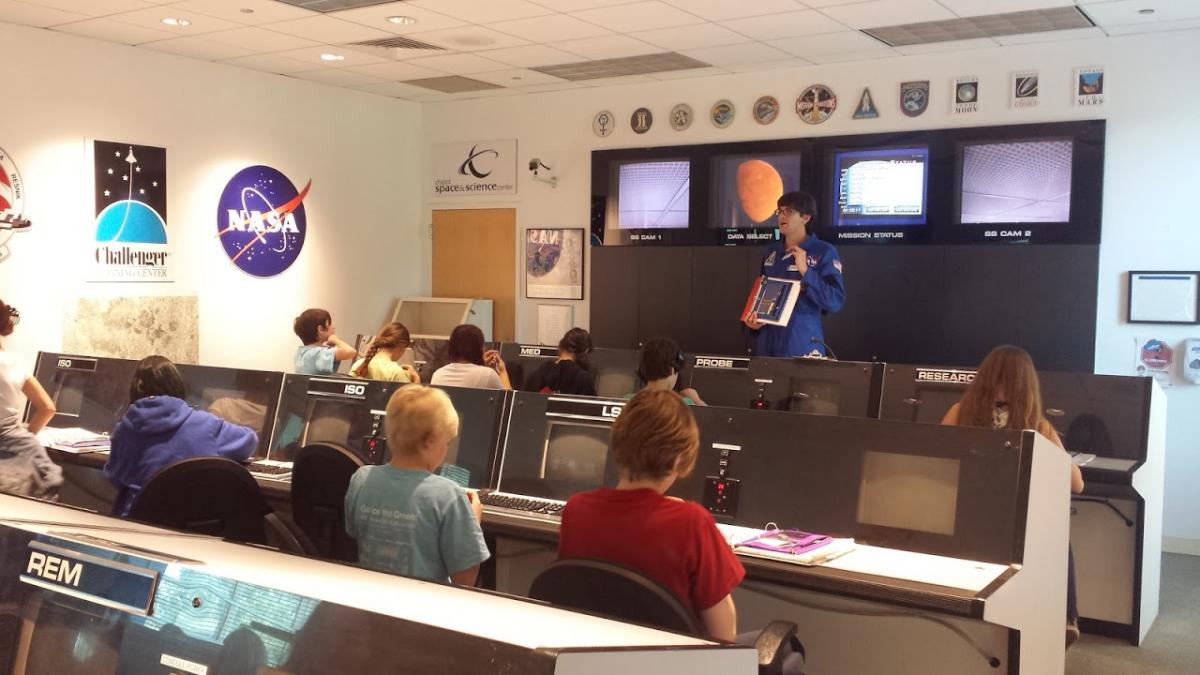 Sitting at their assigned Mission Control stations, Mount Madonna School (MMS) middle school students Meris Brown, Amirah Alexander and Ben Pearson studied the monitors before them, ready to participate as the “journey” to Mars unfolded.
“It really felt like the shuttle crew was in another world,” commented seventh grader Corey Mensinger.
The sixth and seventh grade students were participating in a science, technology engineering and mathematics (STEM) field trip to the Chabot Space and Science Center in Oakland, following weeks of preparation and lessons at school. Prior to their visit, the students applied for jobs to populate a space shuttle and the Mission Control C

enter for a simulated Mars mission. Once the various roles were determined, student teams were
given special STEM lab assignments in preparation for their mission. The Medical Team, for example, was assigned to pulse and blood pressure monitoring; the Remote Team set up an Aquaponics system to use for research during their mission; and the Life Support Team trained on operating scientific instruments and recording data.
For a couple weeks before the field trips, teachers prepared students with related lessons and curriculum on campus. Then, on the day before their own simulated Mars mission, the students had the opportunity to video conference with Chris Patil, a biologist and writer who is participating in the private-sector Mars One Project, which has a goal of landing its first crew on the Red Planet in 2025, and ultimately creating a permanent human settlement on Mars.

Students were eager to ask questions. Sixth grader Addy Catterall-Pendleton asked Patil what his role on the mission will be, once the shuttle has landed. Patil explained that he would be searching for evidence of life on Mars, past or present. He added that his hope, as a space explorer, would be to encounter thriving living systems by going deep below the surface where conditions could be conducive to life. Patil responded eloquently to all the students’ questions, and inspired many budding scientists with his infectious passion for space exploration.
“Talking with kids about this project is my favorite part of Mars One,” Patil said.
At Chabot, the students began their “exploration” with a planetarium visit where they learned about Maya astronomy and their creation story. This presentation was especially timely for the seventh graders, who are currently learning about the Maya in history class.
Next the students headed to Chabot’s Challenger Learning Center for their Journey to Mars mission. The pre-designated teams were split into Mission Control a

nd Space Shuttle rooms that simulated actual space exploration environments. Students had the opportunity to operate robots, handle minerals in a glove box, test samples, and navigate a space craft. They were given tasks to complete their mission of launching a probe and landing a space craft successfully.
“It was fun how the simulation [team] pretended they had a ‘100 years’ of experience to prepare for their mission,” said sixth grader Grace Timan.
“This was a great educational experience for our students,” commented parent chaperone (and MMS Lower School Director) Jenni Leach. “Afterwards, when I asked one of the Chabot science instructors, Jordan Runco, how our students did that day, he replied, ‘They did an excellent job! They had a lot of knowledge when they got here, so we gave them more tasks than we usually give students their age.’ He said they were able to get through all of those tasks and were articulate, engaged and fun!”

When they “returned” from their Mars journey, students explored the Space Center’s interactive exhibits while waiting for sunset. This learning journey extended into the evening hours with a visit to the main observatory at dark. Amateur astronomers had telescopes trained on various celestial bodies and students were able to take turns viewing.
“Several years ago I visited Cape Canaveral and toured the launch sites and vehicle assembly areas at NASA,” reflected parent chaperone and Middle School director Lisa Catterall. “I was struck by the crumbling hulks of unused platforms and empty garages. No launch, they said, was planned in the next four years except by the private sector. As a scientist, I was saddened to think that our society is forgetting how to dream. If we had to describe the tangible deliverables and profit margins for every scientific discovery we made prior to even

investigating the world, we would not have many technologies that people consider lucrative and useful. We need to fund and support open-ended scientific inquiry.
“For this reason,” she continued, “I was very gratified to watch the kids go through such a rich and well-developed curriculum and program in their space journey at Chabot and science classes this month. When we walked through the airlock into the simulated Mars landing craft, I was astounded, and this phrase hit me: ‘No one spends this kind of money on education anymore.’ The equipment was the real deal, and what’s more, NASA will be upgrading it as early as next year. We will definitely return!”