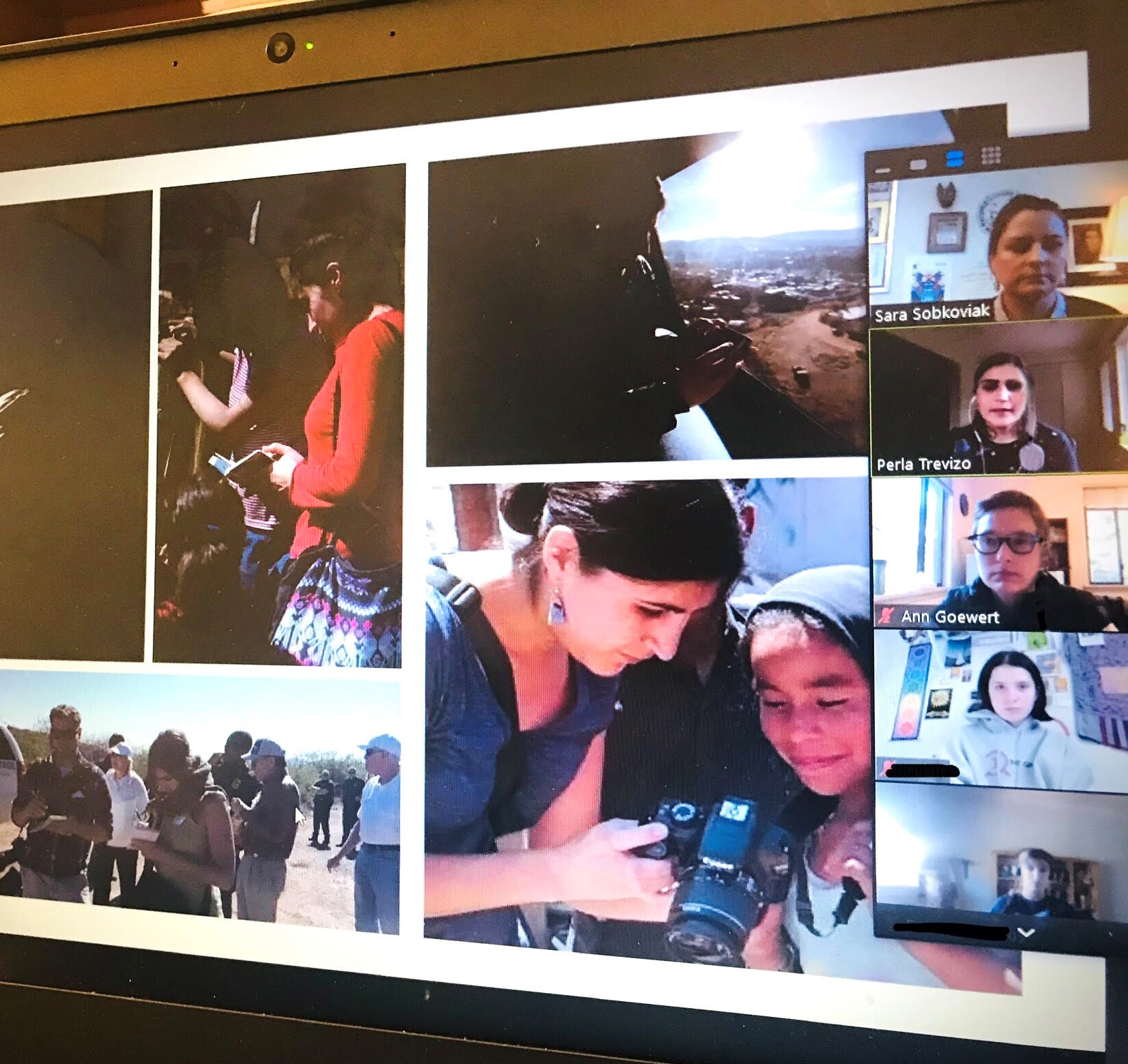 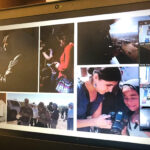 This summer many of our Mount Madonna School (MMS) faculty participated in professional development activities in an effort to prepare for the challenges we might face teaching in this new COVID-19 situation knowing that everything would be different for us. With the quick transition to remote learning last March, finding new ways to engage with our students in completely different formats proved to be difficult. Much innovation emerged, however, and more resources became available to help support all teachers and students during this time.

Like my colleagues, I had the opportunity to participate in a few workshops that were focused on technology to enhance the learning experience, pedagogy and differentiated learning. One workshop, offered by the Pulitzer Center for Crisis Reporting, proved to be very fruitful, offering a new experience by which students would be able to interact with professionals all over the world who are focused on current issues and stories that often are underreported. 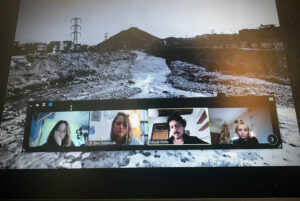 The Pulitzer Center’s mission is to fund global reporting, raising awareness of important issues like climate change, social justice, land rights and global health. They work with major news outlets like NPR, The New York Times, PBS NewsHour and others to bring an awareness of frequently overlooked stories to a wider audience.  Reporting projects supported by the Pulitzer Center have gone on to receive many awards including Emmys, Pulitzers, Peabodys, and British Academy of Film and Television Arts (BAFTAs).

In an effort to connect with the classroom, the Pulitzer Center has created a program and resource center to offer a space for global awareness through education. This summer I attended a workshop remotely focused on underreported stories from Latin America with educators from all over the world, meeting directly with the journalists who are on the ground reporting on these important issues. It was an incredible experience to connect with these journalists via a Zoom workshop, asking questions about their work and how they hope to bring the stories that they are working on to students.

Afterward, feeling very inspired by the possibility of bringing this content to my MMS classroom, I immediately contacted the education center and worked on scheduling sessions with journalists for our students. Hannah Berk, Pulitzer Center education manager, was integral to organizing our first interviews that would follow our unit of study objectives and worked diligently to match us with Spanish-speaking journalists reporting on family, social-emotional health and migration in Central America. 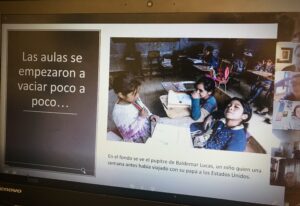 Our first interview was with Perla Trevizo, a Mexican American journalist who has traveled globally reporting on immigration stories and human rights. Students from the ninth grade Spanish class were invited to prepare for the presentation by reading her journalist bio, selections of published work and then develop questions in Spanish focusing on her experience and recent reporting from Guatemala, titled “A Lost Generation.”

Students attended an intimate Zoom interview with Trevizo, learning about her life, her motivation and most importantly, hearing the stories of those impacted by immigration. Head of School Ann Goewert also joined this interview and was impressed by how the conversation developed.

“At Mount Madonna School, authentic learning experiences are a valued component of our excellent academic program,” commented Goewert. “Coordinated by middle and high school teacher Sara Sobkoviak, our Spanish 2 students engaged in a facilitated discussion with Perla Trevizo, in Spanish, about pressing social justice issues in Latin America such as immigration. I was impressed by how the students dug deep to understand and empathize with the lives and challenges of immigrant and refugee children and the impact of the pandemic on these young people and their families.”

Several students shared insights from their conversation with Trevizo.

“I like how she brought in a different perspective of how there are so many teenagers in the world like me, but yet we have such very different lives,” said Erin Kavitsky. “While I got to play with toys when I was younger, they had to grow up quickly and help their parents around the house. They didn’t really get to experience a full childhood.” 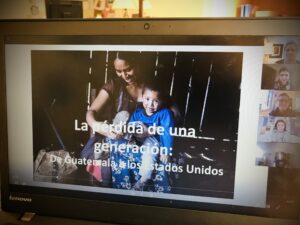 “It was inspiring to talk with a woman who has traveled everywhere and written about it,” Irulan Cockrum. “I always knew there were people out there that really made a difference in the world, and it was impactful to be able to talk with one.”

“Perla did an amazing job with her presentation,” observed Sophia Manzur. “It looked elegant and was very informative. It taught me a perspective of someone else’s life that is completely different from mine.”

“The interview was eye-opening,” shared Bea Miller. “We don’t usually talk about different countries that have harsh conditions, and I think having someone come to talk about them was a wonderful idea. I never think about how other teenagers across the globe are doing; whether they go to school or have clean water every day. It was comforting when she talked about how teenagers in other countries are probably a lot more like me than I realize. Normally people think of kids in third-world countries as aliens and another species, which is horrible. She really said we need to re-think our privilege. Teenagers here, like me, do chores. So do kids in these places too!”

“I love how she told us about the lives of kids that are the same age as us and how their lives are so much different than ours,” said Ona Musoll-Buendia. “She also explained the behind-the-scenes of her journaling, which is something that most people don’t see.”

“Perla was well-spoken and did a great job getting her point across using the information and photos on her slides,” noted Anya Gonzalez.

“I was interested to see how different other people’s lives are,” commented Emma Monclus. “It saddens me that this isn’t a more well-known topic. I’m really glad to learn more about what is going on in the world.” 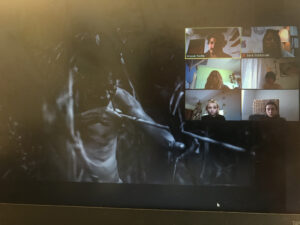 Students in the 11th grade Spanish 4/AP class, meanwhile, interviewed Pulitzer Center photojournalist, Musuk Nolte. Nolte, an award-winning photographer, is known for his powerfully artistic approach when documenting important issues pertaining to human rights, cultural exchange and climate change in his country of Perú. Students were introduced to summaries of his work that included reporting from Peruvian section of the Amazon rainforest and how deforestation has impacted the local indigenous communities. Nolte has also documented Peruvian families mourning the deaths of more than 60,000 people due to terrorist acts within the country from 1980 to 2000, many of these families only now being reunited with the remains of their loved ones.

Nolte’s presentation transitioned to his most recent project, Water Crisis on the Edge, about the growing capital city of Lima and how vulnerable communities on the outskirts of the city are struggling to receive access to clean water, especially during COVID-19. Students then had the opportunity to talk with Nolte about his work, experiences in the field, and why he chooses to photograph mostly in black and white.

Several juniors took time to reflect on the interview with Nolte.

“This interview not only helped me practice my speaking and listening skills in Spanish, but it also helped to shed light on some of the current issues people are facing from different parts of the world,” commented eleventh grader Alyssa Manzur. “The work that Musuk has done is really inspiring. I liked listening to the stories he shared with us, and having the opportunity to learn from him and to see his artwork was fascinating.” 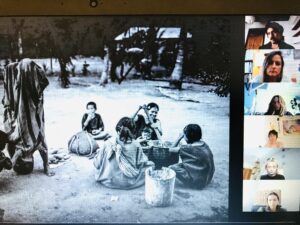 “Being able to talk to Musuk about his projects and what they mean was striking,” said Liana Kitchel. “I was impressed by his presentation and that all of his photographs had a deeper meaning and issues behind them.”

“Getting to see an accomplished photographer’s photos accompanied by a real-time explanation from the person who took them was mind-opening,” observed Kayla Goldstein.

“I thought it was interesting to hear about the issue he chose to bring attention to,” said Ben Pearson, “as I would not have known about it without his presentation to us.”

“I enjoyed Musuk’s presentation because we got to learn more about the profession of photography,” shared student Grace Timan. “I loved seeing his photos and hearing about his process. It was a really different experience than everyday class and made online school have a fun twist to it. It was something we may never have gotten to experience in person.”

Our time with Trevizo and Nolte really helped us to press “pause” and gain some perspective to look outward, beyond our own personal experiences. 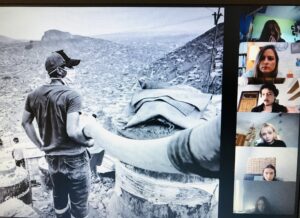 Hearing directly from the journalists who are there doing the important reporting and photographing the individuals affected, hearing how they are coping, and about their fears and dreams for the future really connected us to them and their stories.

In the interview with the ninth grade students, Trevizo commented that one of the most difficult parts of being a journalist who spends so much time in the communities they build trust with and digging deep into the story, is to remain objective and not want to intercede when you have individuals who tell their stories with such vulnerability. For her, the important part is to keep telling these stories, building awareness globally, and participating in these classroom visits to create spaces for curiosity, critical thinking and developing empathy.

I look forward to continuing this partnership with the Pulitzer Center and bringing more of these experiences to MMS classrooms to provide an opportunity for students to connect with voices all over the world to develop curiosity, compassion and engage in positive global citizenship. 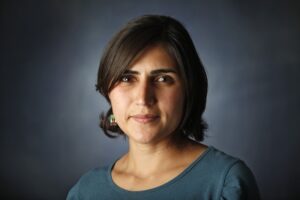 Perla Trevizo is a reporter for the ProPublica-Texas Tribune Investigative Initiative. Trevizo is a Mexican-American reporter born in Ciudad Juárez and raised across the border in El Paso, Texas, where she began her journalism career. Trevizo spent more than 10 years covering immigration and border issues in Tennessee and Arizona before joining the Houston Chronicle as an environmental reporter. She has written from nearly a dozen countries, from African refugee camps to remote Guatemalan villages, with the goal of broadening readers’ understanding of the global issues that impact the local communities where she has worked. Her work has earned her national and state awards including the Dori J. Maynard Award for Diversity in Journalism, French-American Foundation Immigration Journalism Award, and a national Edward R. Murrow for a story done in collaboration with Arizona Public Media. She was also honored as the 2019 Arizona Journalist of the Year by the Arizona Newspaper Association. 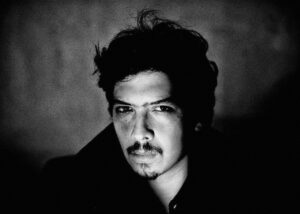 Musuk Nolte holds a degree in professional photography and a master in contemporary photography at Centro de la Imagen in Perú. His work has a documentary and artistic approach about cultural and social issues in dialogue with other sources of understanding the human condition, like different cultural cosmovision’s in the Amazonian and human rights cases.

He has been staff photographer in El Comercio newspaper and his work had been published in international media such as Time Magazine, LeFigaro, Corridera della sera, CNN International, Internazionale, L’Insensé, Etiqueta Negra, El País, Folha Sao Paulo, among others.

Nolte has been awarded with the VI National Photography Award “Eugene Courret” and the FONCA Fellowship. He was selected for the World Press Photo Master Class in Latam and is a recipient of the Magnum Foundation’s Emergency Fund grant. He has also received the Elliott Erwitt Havana Club 7 fellowship, presented with solo shows in Paris Photo and PhotoEspaña XX.

At the time, he is a National Geographic explorer grantee and member of the board and lecturer of the specialization in documentary photography of Centro de la Imagen in Perú.