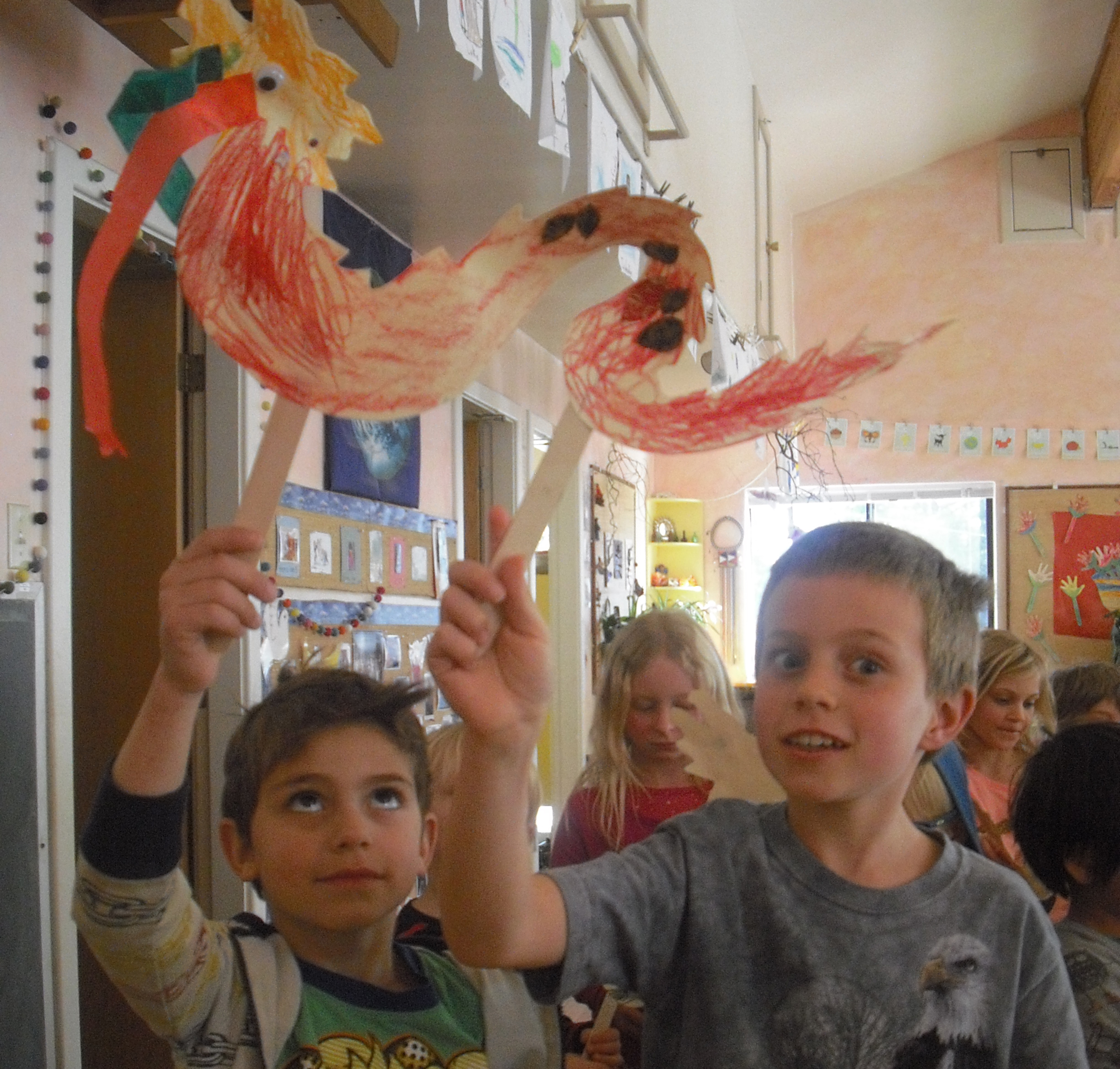 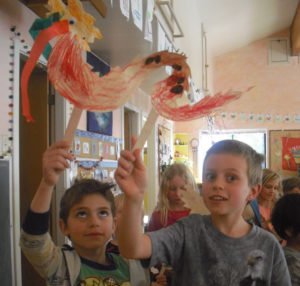 In the long ago days of the Islas Filipinas, as the Philippine Islands were once known, storytellers told marvelous tales of the wisdom – and foolishness – of rulers and ordinary people. One such story, King Bato and Asin, a Filipino folktale that is the basis for an original play written by teacher Nicholas Cabassa, will be performed by third and fourth grade students as part of their cultural awareness presentation.

A Journey Through Southeast Asia will be a culminating presentation of several months of in-depth learning by Mount Madonna School (MMS) elementary students, and spotlighted at the upcoming Cultural Awareness performances on March 29-30.  Folktales, traditional dances, songs, languages from Southeast Asia, the history and politics  – these are just some of the many aspects of culture that are part of this in depth study throughout the elementary school. 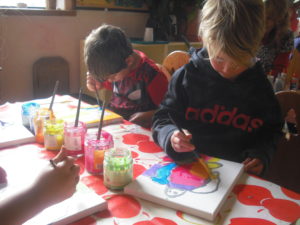 The performances will be held in the Community Building at Mount Madonna Center; with receptions at 9:00am and presentations at 9:30am. Much in the way that MMS high school students hold a public presentation following their return from distant learning journeys, these performances are the’ return  of elementary students from their cultural learning journey to be witnessed by the families and friends.

Elementary dance teacher Isa Stead worked with first through fifth grade elementary classes, choreographing dances for them to perform at Cultural Awareness. Elementary music teacher Gitanjali Rivera also worked with these classes, teaching traditional songs from the countries they are studying, that will be performed in each country’s primary language. 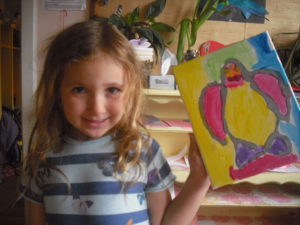 Preschool and kindergarten students have been learning about Indonesia, a volcanic archipelago comprised of thousands of islands filled with natural and geologic wonders, including monkey forests, jungles sheltering elephants, Komodo dragons. Students are studying the culture through art, baking, games, story and song. They have learned how to sing a “good morning” song, “Head, Shoulders, Knees and Toes” and a version of “Patty Cake, Patty Cake” in Indonesian. Their class baking has involved an exploration of rice dishes and desserts, tempe and tofu, tropical fruits and the spices that contributed to Indonesia being referred to as the ‘Spice Islands’. Following their presentation, the students will enjoy homemade Indonesian wingko babat (coconut cakes). The children collaborated with their fifth grade big buddies on an art project celebrating the revered Asian elephant and enjoyed preparing fresh spring rolls to eat together.

“I have a personal connection with Indonesia as I traveled there in college and studied the language and culture,” shared Preschool/Kindergarten Director Hema Walker. “It is such a beautiful part of the world with a rich, diverse and beautiful heritage.”

Kindergarten students focused a little deeper and made their own books illustrating some of the songs that they are learning and exploring the animals of Indonesia. Students explored the concept of batik with pastels and watercolor on paper, gold and silver outlined pictures on canvas and clear glue and acrylic paint on cloth for costumes. The girls batiked their own sarongs for their costumes and the boys batiked their own udeng head scarves. 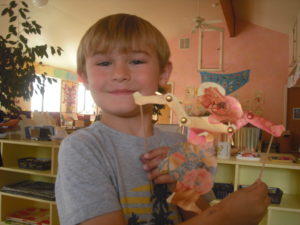 Cambodia is the country of focus for first grade. Students will perform The Treasure of Life, derived from the Jataka Tales, Buddhist morality stories. Teacher Cassia Laffin said she chose a Buddhist play because about 95% of people in Cambodia are Buddhist. Their play, about two sons who live selfishly with little regard for their mother, emphasizes how materialism does not equate to happiness. Upon their mother’s death, they open a chest that much to their surprise, is filled only with pebbles, and a note encouraging them to change and become better men.

First grades students are learning how to count in Khmer, an activity that is integrated into their daily calendar lesson. They are learning about native animals, and drawing animal portraits, as well as learning about the economy, religion, and topography. Each student is creating a poster board to teach their classmates about a topic they’ve chosen, including temples, environment, plants, animals, education, families, and more. First grade will perform a simple version of a traditional Khmer coconut dance Robam Kous Trolaok.

Second graders are learning about the country of Vietnam with teachers Jenni Leach, Prema Gammons and Hamsa Heinrich. Heinrich works with the second grade for social studies. 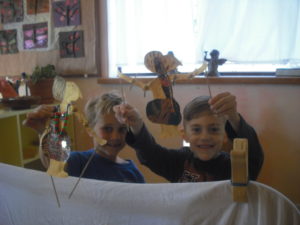 “I chose Vietnam because it is a wonderfully diverse land of mountains, rain forests, farmland and beautiful beaches,” said Heinrich. “The class is focusing on Vietnam’s long, rich history and interesting culture. It’s also important to me that future generations never forget that this beautiful country was nearly destroyed by a terrible war. While it’s not the focus of our study, it is part of it.

“The class has been studying the Southeast Asian map and to understand where Vietnam is located, what countries are nearby, and learning about the region’s climate,” she continued. “We are reading a lot and our wonderful MMS librarian, Gail, has sent us a stack of stories and references about Vietnam so there is plenty of literature and stories to share. Gitanjali is practicing a Vietnamese song with the students, and Isa has taught them a beautiful hat dance, Mua Non La, inspired by the culture. It is so impressive how much these young minds are capable of soaking up! We looked at the huge range of tropical butterflies and settled on an art project making colorful, larger than life butterflies. The children are creating traditional hats called non la, or leaf hats, for their dance and enjoying gathering costumes for their play. 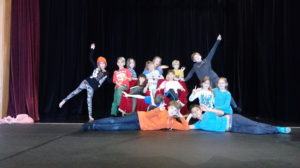 “Rehearsals for the play are amazingly rich. What concentration and focus a production takes! Sera and Sophia’s grandmother and former actress, Revital, has been coaching the children on getting into character and bringing the story to life. That’s a tall order for such young children, but watching it build through the years is a miracle! It’s one of the real strengths of our MMS curriculum. Public speaking is a fabulous tool in all walks of life.”

Third and fourth graders have been learning about the culture and traditions of the Philippines, a country which also has a rich history of myths and legends.

“While it’s totally different, the Philippines have a lot of western influences,” noted Cabassa. “Approximately 70% of the population are Catholic due to the Spanish history and connection, and one of the unusual customs is a four-week Christmas celebration. My students were really interested to learn about that. The Philippines are also part of the family heritage of one of my students, so it’s a good fit for us to study with that connection, and her family has provided authentic and relevant additions to the class’ learning and study.” 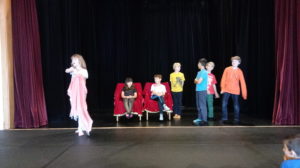 Students will sing a song in Tagalog, and perform a traditional tininkling dance with bamboo poles.

“The dancers will be the rhythm makers as well as dancers as they take turns keeping rhythm and dancing in and out of the poles,” said Stead. “They will be performing their dance to a non-traditional song, as it is sometimes done.”

Rounding out the presentation and study, is fifth grade’s study of Thailand (or Siam, as it was formerly known).

“Thailand is the fifth largest plastic polluter of the oceans,” shared teacher Jessica Cambell, “although the country has a new initiative to work on reduce their plastic waste. Southeast Asia has four of the top five plastic polluter countries of the world – Indonesia, Vietnam, the Philippines and Thailand. The United States contributes to Thailand’s environmental degradation, as it is a primary country that American recycling in sent to for processing, thus our waste is choking their waterways.”

Fifth graders have been learning the Rom Vong, a social dance, said Stead. Their song is of the luk thung music style. Luk thung is known as “country music,” as it has a mix of Thai and western sound. As well as using the Rom Vong students are working with the concept of unison that appears again and again in most Southeast Asian dance forms. Fifth graders are also helping to choreograph their own dance.

At the event, attendees will have the opportunity to purchase the student-made artworks inspired by the cultures and countries that students studied. Purchases are by donation and proceeds will be gifted to a nonprofit charitable organization to be determined by the teachers.

“I love that MMS has a social service project tied to our cultural awareness program,” commented Director of Lower School Jenni Leach. “Kids helping others, I believe, helps students understand who they are in the world, and that they can make a positive difference. By creating and donating their art pieces to make money that will be used to help others, MMS students learn the values of empathy, compassion, generosity and gratitude. They learn that together we can make a difference.

“Through our annual cultural awareness focus, teachers create a coherent, in-depth unit of study across the elementary grades,” she continued. “In June, teachers meet to decide the cultural theme for the coming year based on historic or current global topics and teacher interest. When the study units begin, teachers engage students with complex content and delve in at depth that is appropriate for each grade level and developmental level. Students learn about a variety of cultures and this helps to enrich and inform our concept of global citizenship.”