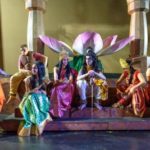 One of the major Sanskrit epics of ancient India, “Ramayana!” returns to the California stage in a musical production featuring lavish drama, dance and songs by a school’s entire student body and others from the community.

Mount Madonna School’s nearly 200 students, from pre-K to high school seniors, will put on the show June 6-9 at the Mexican Heritage Theater in San Jose for the 41st annual staging of the event by the four-decades-old private school.

“‘Ramayana!’ has been central to Mount Madonna School since its founding,” Supriya McDonald, head of the school, said in a news release. “It’s the culmination of months of work during the academic year and is a year-end celebration for our community embracing diversity and creative self-expression.” Read more