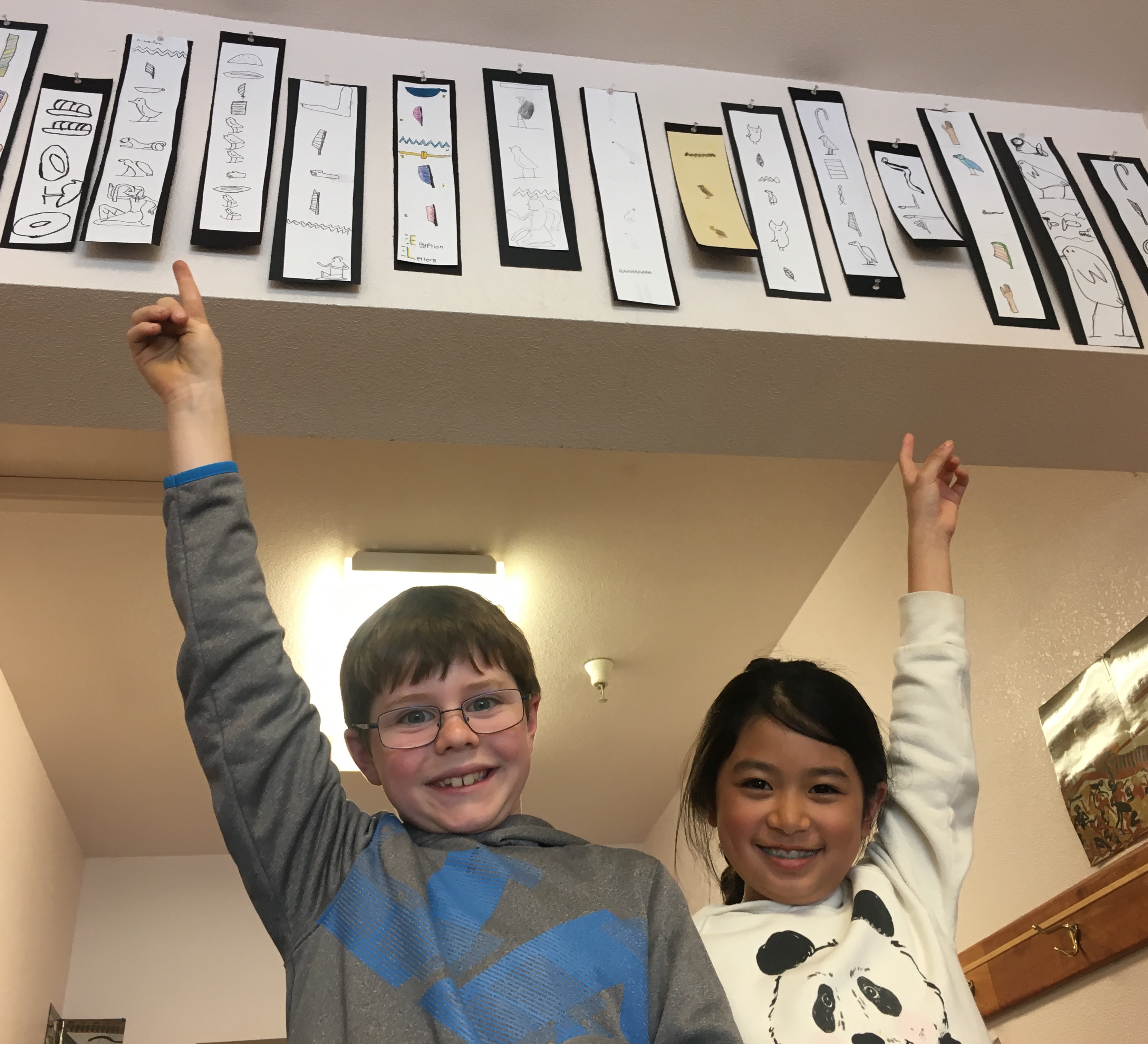 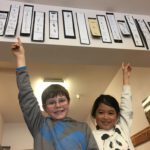 When the Arab Spring sparks a civil uprising, young Nadia and her family are forced to flee their home in Aleppo, Syria. So begins Escape from Aleppo, by N. H. Senzai, a fictional story inspired by current world events, and the basis for the play Mount Madonna School (MMS) fifth grade students will perform as part of their cultural awareness presentation.

Exploring the Fertile Crescent will be a culminating presentation of several months of in-depth learning by MMS lower school students, and spotlighted at the Cultural Awareness performance on March 29.

“Each year our lower school students focus on and learn about the history and culture of a different region of our planet, ending with our annual Cultural Awareness performance for families, grandparents and special friends,” commented Director of Lower School Kami Pacheco. “This year the students are learning all about the Fertile Crescent, often called the ‘Cradle of Civilization,’ the region in the Middle East which curves, like a quarter-moon shape, from the Persian Gulf, through modern-day southern Iraq, Iran, Syria, Lebanon, Jordan, Israel, and northern Egypt, and where agriculture and early civilization flourished.  This age-appropriate, cultural awareness unit is especially important for our students to help enrich and inform our concept of global citizenship.” 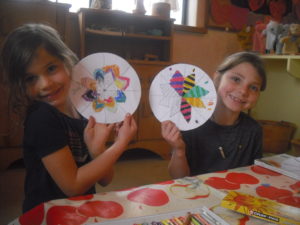 The performance will be held in the Community Building at Mount Madonna Center; with a reception at 9:00am and presentations at 9:30am. Much in the way that MMS high school students hold a public presentation following their return from distant learning journeys, their presentation is the ‘return’ of the preschool through fifth grade students from their cultural learning journey, and intended to be witnessed by the community.

Music teacher Gitanjali Rivera worked with first through fifth grade students, teaching each class a traditional song from the countries of the Fertile Crescent.

“As someone who has been involved in inter-religious dialogue for more than 30 years, and considering the current cultural and political climate, I feel it is imperative to teach students about the beauty and depth of traditions other than their own,” shared Rivera. “This year we’ve chosen to study countries from the Fertile Crescent, the birthplace of civilization and home to many religious traditions. The students will be singing in Hebrew, Arabic, and English as we celebrate our differences. 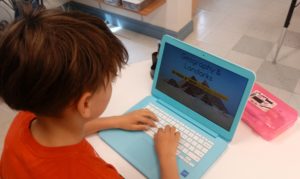 “Many songs from this particular region were familiar to me through my leadership in the Dances of Universal Peace,” she continued. “While searching for songs from Syria, I found the beautifully moving piece called Heartbeat, written for UNICEF (the United Nations International Children’s Emergency Fund), to support Syrian refugee children. When I showed the fifth grade students a video of this song, and talked about the plight of Syrian families in refugee camps, the students were moved to compassion and decided that day to take on this challenging piece. I am so proud of the hard work that all of the students have put in to make each of these songs come alive.”

Preschool and kindergarten (Pre/K) students learned about the whole region, rather than focusing on a single country. Among the Pre/K families, several brought “tastes” and traditions of their cultural heritage, from Iran, Turkey and Armenia, to share with the students. 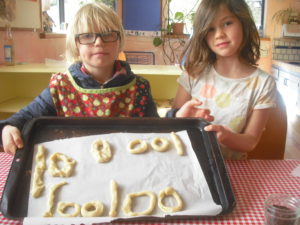 Tactile – and frequently edible – activities are a regular part of the Pre/K curriculum, and this extends to their cultural studies too. Students were treated to one of earliest known desserts, date candies spiced with cardamom and cinnamon; rose water-flavored baklava; different types of flatbreads and Middle Eastern staples, including pomegranate seeds and juice, hummus and mint tea. For several weeks, the students were given different regional spices, including cumin, cardamom, cinnamon, allspice and nutmeg, to grind up in their classroom mortar and pestle. To celebrate the one hundredth day of the school year, students baked 100 shaped Middle Eastern Ghraybeh shortbread cookies. Kindergarten students focused a little deeper and made their own books illustrating some of the different grains that grow in the Fertile Crescent region, the animals that live there, and the Arabic numbers up to 10. 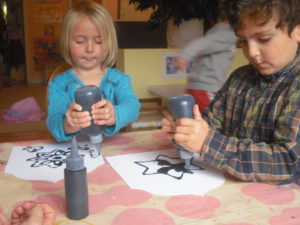 For their performance, Pre/K students will sing a “good morning” song in Arabic, Farsi and Turkish, the three primary languages of region. They’ll also sing Arabic versions of Ten Little Fingers and Itsy Bitsy Spider and dance an Armenian dance taught to them by one of the class families.

“We began our studying with the ancient Egyptians and Mesopotamia,” shared Preschool-Kindergarten Director Hema Walker. “The children created their own ‘cylinder seals’ and used them to press original cuneiform-inspired picture stories into wet clay. They also formed pyramids out of clay. 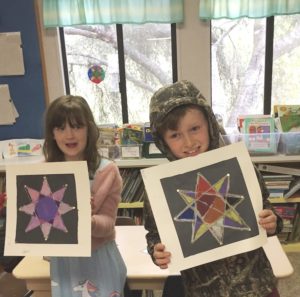 “The students learned how this area is the center of the Jewish, Christian and Islamic traditions and made Islamic-style ‘stained glass’ windows and mosaics with their second and fifth grade buddies, and stylized hands called Hamsa that represent good luck. Later they studied a bit about Iran through the celebration of Nowruz the Persian New Year on the first day of spring. The children were introduced to the Silk Road, and how it went right through this region and brought many treasures and ideas to this part of the world. Another project included painting their own silk scarves to wear as costumes for the performance.”

First grade students are studying Israel, and will perform a play based on the book Gershon’s Monster: A Story for the Jewish New Year by Erik Kimmel. The students will also sing a song in Hebrew from the Book of Psalms. Students looked at maps, flags and landmarks; were introduced to Jewish practices and traditions; and learned some common Hebrew phrases. Each student also chose an area of interest to study and gave an oral report in class. 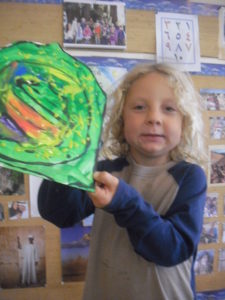 Second grade students focused on Iraq for their cultural studies.

“The primary element and connection most people have with this region is war,” acknowledged teacher Prema Gammons. “I wanted the second graders to have a broader understanding of this geographical region, so we are approaching it from the perspective of exploring ‘the journey’ and what we might learn when we journey from home. We looked at how Iraqi culture holds roots in ancient Mesopotamia, we studied the geography, the architecture (even including a geometry-based art project, as students are learning about geometry in their math lessons). We read several traditional folktales about people leaving home to discover something, which serve as ‘teaching stories, as does the Ed Young’s adaptation of Sufi wisdom, What About Me?, the basis for the second grade’s play. Students will also perform an Iraqi peace song. 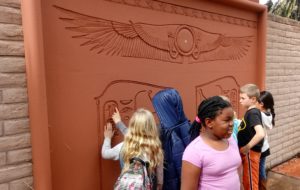 Third and fourth grade students’ days are learning-filled with studies of ancient and present-day Egypt; and decorating the walls of the hallway space between their two classrooms to resemble the inside of an Egyptian-style pyramid. The two classes were also able to visit a great cultural resource, the Rosicrucian Egyptian Museum in San Jose, and had the opportunity to view some real artifacts.

In third grade, students researched ancient Egyptian clothing for costume ideas for their play, The Social Pyramid in Ancient Egypt–A Learning Journey, an original story by Jenni Leach that teaches about social hierarchy and the roles people filled that contributed to the culture. 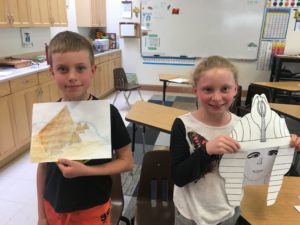 “Each student is representing one part of the social pyramid in ancient Egypt,” shared teacher Kristin Webb. “They are creatively adding their own personality to each of their characters, and it’s fun to see all of the hard work unfold into our play. Third and fourth grade students are also exploring Egyptian art, and ‘wrote’ hieroglyphic versions of their names; and made a two-dimensional version of a sarcophagus, using their own face and body as the template. They are learning about patterning and symbols that were valued and had meaning for ancient Egyptians in the afterlife.”

“I chose Egypt for the fourth grade to learn about because it has always been an interest of mine, and I thought the kids would find it a really interesting topic, too,” said teacher Nicholas Cabassa. “Mummies, tombs, the afterlife, gods and pharaohs are all things that fourth graders can’t resist learning about!” 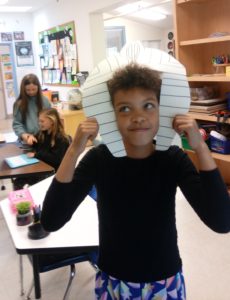 Fourth grade students are currently working on a group presentation on various aspects of Egyptian culture and government; and focused on rehearsals for their play, The Hysterical History of Cleopatra  by D.M. Larson, and along with third grade students will be performing a song about a young pharaoh from a new children’s musical, Tut, Tut!.

For their cultural awareness studies, fifth graders are learning about the long history of Syria and looking into its modern perils.

“In reading Escape from Aleppo, students are learning about what a refugee is and what constitutes a refugee crisis,” said teacher Jessica Cambell.  “Students are also learning about Syrian culture though research reports, presentations and creating art pieces. Each student chose a different aspect of Syrian culture from their long, long history to their food to traditions to dances. The students are teaching and sharing their learning with one another though oral presentations. 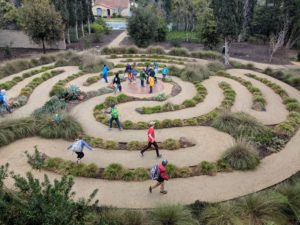 Working with art teacher Hamsa Heinrich, fifth grade students studied photographs depicting different types of Islamic tile work. They then carved a small square, inked it and repeatedly printed it on rice paper. Where the edges met, a surprising pattern emerged. It took much focus to fill the paper, but even with a slight misprint here and there, their prints were beautiful and mimicked the intricate tile work of the region.

Following the Cultural Awareness presentation on March 29, fifth grade will prepare a Syrian feast that will include Arabic bread, Syrian Black-eyed Peas, and desserts.” Fifth grade students will perform The Woodcutter and the Lion, play adapted from a folktale of the Deir al-Zour region of eastern Syria

“I chose this story because it has a wonderful life lesson about how wounds heal, but hurtful words can last a lifetime,” explained Cambell. “At the end, the students will be holding up signs with facts about Syrian refugees. The play ends with a connection to the war in Syria and how tales like these are slowly being lost, and how we all need to have generous hearts like the lion and develop empathy for those seeking refuge.”