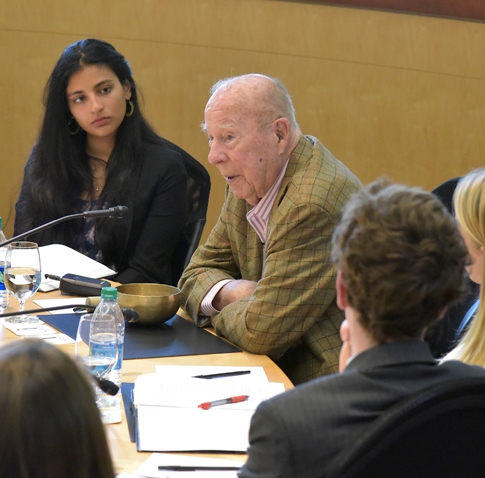 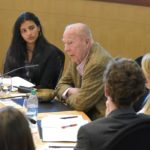 Sitting around an imposing table at the Annenberg Conference Center at Stanford’s Hoover Institution, some two dozen Mount Madonna School (MMS) juniors and seniors leaned forward listening intently to the soft and yet authoritative voice of former Secretary of State George P. Shultz. The students had prepared for this interview for weeks, conducting research and discussing and formulating questions, as part of their Values in World Thought social studies curriculum. This preparation and hard work was worthwhile; as evidenced by students’ engagement with this seminal political figure, and insights drawn from the advice and experiences he shared.

“One of the most beneficial aspects of engaging in dialogue is that through this process we are forced to acknowledge the complexity and nuance of an issue,” observed teacher and Upper School Director Shannon Kelly. “If we take the time to step away from our own assumptions and truly listen to what the other person is saying, we can absorb thoughts other than our own. When we speak with individuals such as George Shultz, I see my students’ horizons expanding right before my eyes. They start to understand how decisions are made and that there is not always a ‘right’ or ‘wrong’ answer to life’s most difficult questions. Secretary Shultz has faced many difficult questions, so his perspective carries particular weight with the students.” 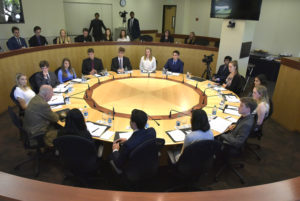 “Interviewing George Shultz was one of the highlights of my senior year…One of my favorite things he said during the interview was in response to a question asked by Imogen about immigrants. He paused a moment before he responded, and then started to speak about what it means to be an American. He discussed a painting of George Washington crossing the Delaware River, saying that most people notice George Washington but if you look at the rest of people in the boat there is great diversity. He spoke on the importance of diversity in the United States and how everyone is an immigrant from somewhere. Finally, he stated, “Anyone can come to America and become an American.” This stood out to me because it is one of things that makes the U.S. unique. – Sienna Clifton, 12th grade

“This year we had a second interview with Secretary Shultz, and just like the first time, I was excited. The interview was great. I don’t think I will ever speak to anyone as accomplished as Secretary Shultz. George Shultz is one of two statesmen in all of U.S. history who has served in four federal cabinet positions. Under President Eisenhower, he served as an economic advisor. Under President Nixon, he served as Secretary of Labor, Secretary of the Treasury, and the Director of the Office Management and Budget. Then, from 1982 to 1989, he served as President Reagan’s Secretary of State, the highest cabinet position under a presidency…During the interview, he said something along the lines of, “You are known from the way you present yourself.” I think out of all people, he definitely has the authority to state this. He isn’t a well-respected man in politics because he did nothing; he demonstrated that he is a person who will get the job done, and deserves all the respect he gets. I am very grateful for being given this opportunity.” – Cyrus Kamkar, 12th grade 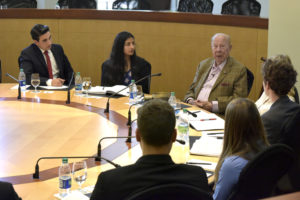 “When we talk to people who have taken part in history, we come to understand that we as human beings create that history,” commented teacher Ward Mailliard. “When we hear that they made history by perseverance, thoughtfulness, integrity and hard work, we know then what we must do. It is as important for our schools to be as concerned with the content or our students’ character as it is to measure their knowledge of the content of their books. Both are important and neither will serve well without the other.

“This is why we make the effort and take the time to prepare for and pursue interviews with those like Secretary George Shultz who contributed so meaningfully to his community and to the world,” Mailliard continued. “It is the character we hope our students will develop regardless of the disciplines they pursue or the jobs they hold. It is part of what makes Mount Madonna School what it is. We expose the students to the experiences, and we hope, as Secretary Shultz said, that they understand that ‘values and the ability to interact with people are the most important part of academics’.”

This weekend the MMS’ juniors and seniors will travel to Washington, D.C. to interview Congressional and non-governmental leaders and activists. This Learning Journey (May 12-23) is a biennial part of the Values in World Thought program. The students’ experiences will be shared via video by Devin Kumar (’06), photographs and by the students themselves via written reflections. Follow their blog at dc.MountMadonnaSchool.org.