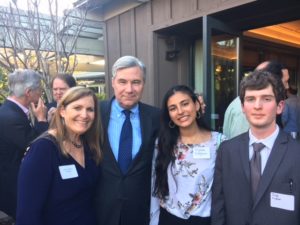 One of the event hosts, Sally-Christine Rodgers, a longtime friend of Mount Madonna School (MMS), contacted faculty member Ward “SN” Mailliard and asked him if two MMS high school students would like to attend the reception. Senator Whitehouse is an active environmentalist.

“The event was filled with all sorts of climate-perturbed entrepreneurs and politicians,” observed Kaplan. “We looked up the names of a few of them. They all have lists of achievements to their names. We met Senator Whitehouse from Rhode Island. He gave a talk focusing especially on the negative influence of ‘dark money’ and the disconnect between the people and the science. He strikes me as a man who holds strong to his beliefs and works hard to get things done.

“There were less scientists and more political figures than I had expected. It was also much less structured. I was expecting a few speeches and maybe some questions after. The event was really more of a social mingling with one brief speech towards the end.”

Mount Madonna juniors and seniors take the two-year Values in World Thought social studies class developed by Mailliard and co-taught with Shannon Kelly, and are preparing for a bi-annual learning journey to Washington, D.C. this spring.

“It was a great experience,” commented Bharghavan. “This was the first time I have gone to a political event and it was interesting to see how it was run. I am now even more excited for our trip to Washington, D.C.”

“It really drives home the importance of preparation,” said Kaplan. “It is essential to know some of the background and achievements of people before meeting them in a formal setting. D.C. will be much easier because we will be prepared.”