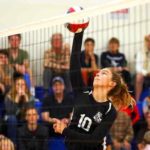 When the girls volleyball season extends past Thanksgiving — an experience only 26 teams across the state will get to enjoy this season — it seems the teams staring across the bracket at each other either know each other intimately or know nothing of each other. Mount Madonna School and San Marin, who will be competing Saturday for the CIF NorCal Division V title, can be lumped into the second category.

Following the Hawks’ five-set victory over Clear Lake in the semifinals Tuesday, coach Erin Mitchell said she’d be spending what remained of the night and most likely the entire next day scanning the Internet for film on San Marin. Mustangs coach Michael Mann did the same. Read more