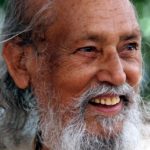 Baba Hari Dass, the spiritual leader and silent monk who inspired thousands out of the Mount Madonna Center north of Watsonville, died Tuesday morning in his Bonny Doon home. He was 95.

Known by his students and devotees as Babaji — Hindi for “respected father,” he taught yoga and meditation out of the Watsonville retreat center and school after moving to the U.S. from India in 1971.

Babaji took a vow of silence in 1952, conversing only through his writings and a small chalkboard from which he would dispense terse-yet-profound utterances to those who sought his advice.

Asked once by a Sentinel reporter to describe himself, he wrote simply, “I am what people see me as.” Asked how should one live a good life, he would reportedly respond, “Work honestly, meditate every day, meet people without fear, and play.”Read more