Cala Watson, third grade, Felix Alvarado and Kahdin Watson, fifth grade, travelled to Detroit, Michigan in early June to present their inventions to a panel of judges and participate in learning activities about the history of innovation.

“Inventing is important to me because it helps to think of problems in the world and then you can figure out how to fix them and help more people.  I enjoyed meeting with other kid inventors because I got to learn about their projects and how they help 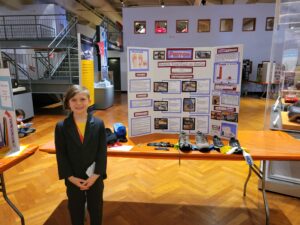 people or the Earth and I got to make new friends with fellow inventors,” Cala Watson said.

Watson created “Feetch: Stretch Your Feet on the Go,” inspired by her mother’s foot pain.

“I’m so impressed by your invention, Cala!” commented an Invention Convention judge. “And also so touched how you wanted to make your mom feel better and make it easier for her. I really value how much time and effort you put into prototyping and explaining the goals and outcomes for each prototype. You’ve made great progress solidifying your idea, testing and prototyping, and utilizing materials at hand.”

“Feetch” placed third for all third graders in the United States.

“We were told around 150,000 students nationally entered the Invention Convention this year. Around 500 were invited to nationals,” said Rebecca Kershner, Cala’s mother. “I value Invention Convention because you hear kids say ‘I am an inventor.’ They start identifying with being an inventor – feeling empowered to make a positive impact on problems in their lives and world. I love the confidence, skills and positivity Invention Convention fosters. I feel it prepares our children for the world they will inherit.” 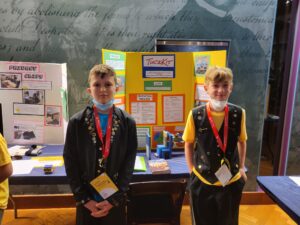 Felix Alvarado and Kahdin Watson teamed up to create the prototype for the “TuckKit,” a hydraulic pressure release arm that reminds students to tuck their chair under their desk.

“I noticed that kids did not push in their chairs a lot of the time and people trip over them,” said Kahdin Watson.

”You came up with a very interesting solution to a problem that teachers are faced with. The fact that you made 3 prototypes was terrific and in doing so it demonstrated how your progressive learnings led to solutions at each iteration level. Your identification of needed product improvements was admirable and appears to be well thought through,”  commented one judge about the TuckKit.

The TuckKit won the Safety Category for all grade entries in California.

“It was a lot of work to get to the National Invention Convention and do everything that we needed to do to prepare for our presentation,” Alvarado said. “I enjoyed seeing the Henry Ford Museum and Greenfield Village, and all of the cool inventions that people made. The judges were happy to hear about our invention and took us very seriously as inventors.”

Fabian Alvarado, Felix’s father, commented, “the boys worked really hard and we’re proud of them. The judging was rigorous and based on a multi-point rubric.”

Students’ ingenuity was on display, and their inventions ranged from mosquito-repellant, to an app that translates technical articles into a more kid-friendly, readable language.

To prepare, first through fifth grade students spent several weeks in their T.E.A. (technology, engineering and art) specialty classes ideating and creating unique prototypes of their original inventions. Students learned new skills and were encouraged to be creative as they checked their ideas against things that already exist, designed and redesigned their inventions and finally, built models and working prototypes that they presented to the MMS school community.