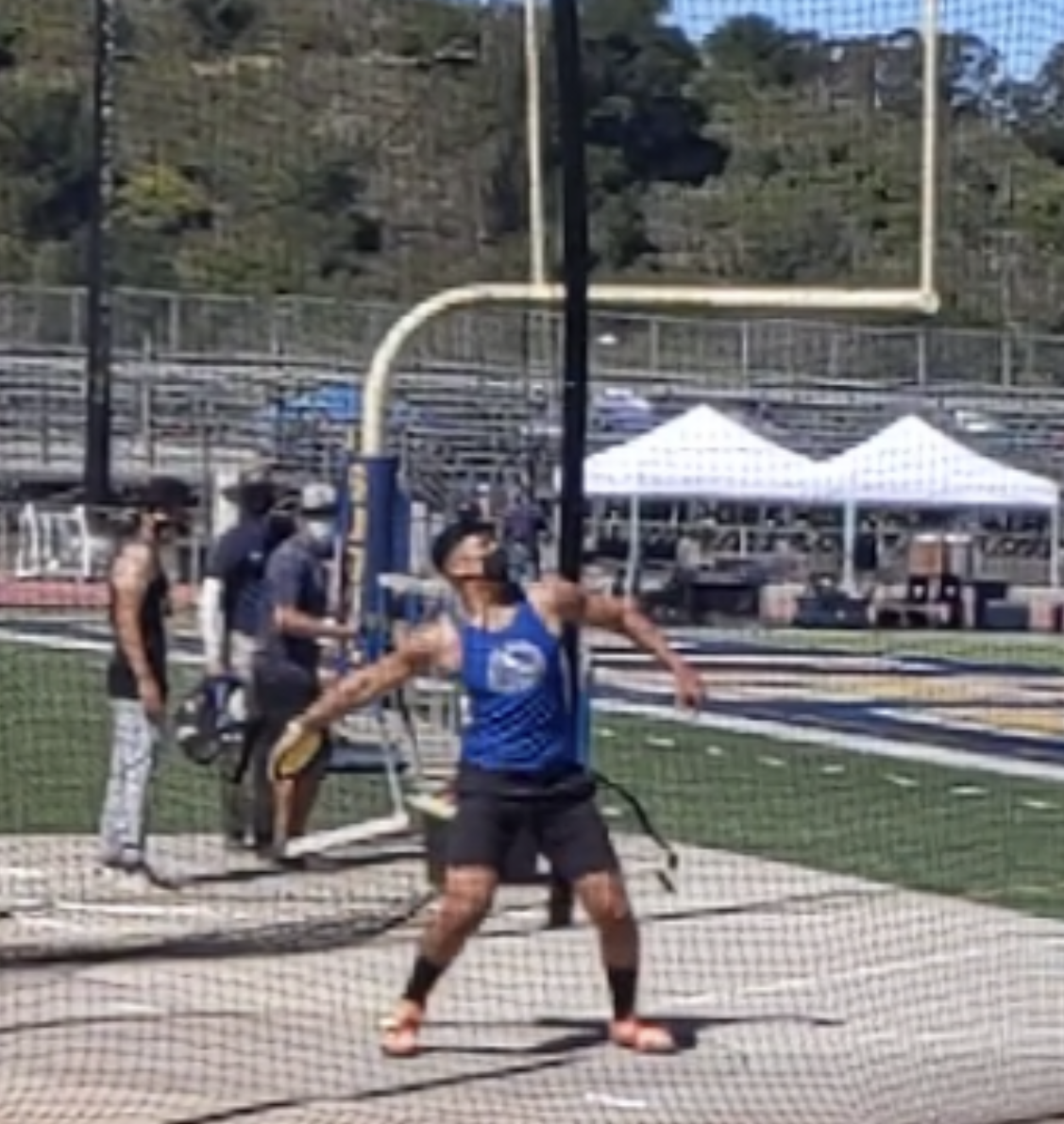 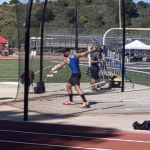 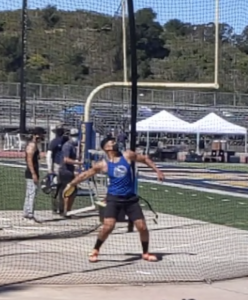 Ocampo-Sobkoviak competed in the long jump and placed 29th with a jump of 14′.75″. Moreno competed in the discus throw, finishing 14th with a distance of 129′; and in shot put, finishing 10th with a throw of 43.05′. His shot put finish qualifies him to compete in the CCS finals on June 19 at Soquel High School.
Octavio we wish you all the best in the final competition! GO HAWKS! 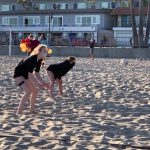 Beach Volleyball, April 30, 2021: This year, Mount Madonna’s accomplished indoor volleyball program transitioned from the Hawks’ Nest to the sand courts for a brief season of beach volleyball. The girls team was coached by MMS parent Kent Kitchel, and the boys team by alumna Sophie Ortiz (’16), a formidable player when she played for the Hawks. Following, both coaches share reflections.

“It was an unusual boys season by any terms,” commented Ortiz. “I am so grateful for how quickly the boys accepted me as a 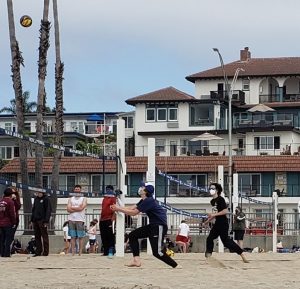 coach, how hard they worked under the circumstance of a shortened season, and our first beach competition. Senior Ronan Lee absolutely optimized the spirit of the team this year. He always went with the flow, worked hard, all while cracking jokes. Ronan has the ability to work hard and not take himself too seriously that will serve him well going forward. I feel absolutely honored to coach our boys team, and have the utmost respect and thanks for PK McDonald, high school athletic director; he did the hard work to make sure the boys had a season under these difficult circumstances. 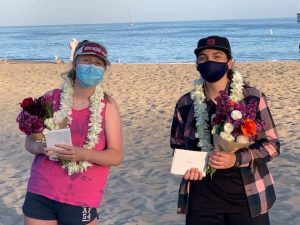 use the season was mostly unofficial, there is no real ranking system for the boys finishing status,” she continued. “There were no set partners and team members took turns playing with different partners. The usual win/loss system didn’t apply, and if my memory serves, the season was a bit of a draw, with the Hawks’ mini-tournaments against Harbor High going 3-1, Aptos 1-3, Scotts Valley 2-2, and Santa Cruz 1-3.”

“It was a season with some ups and downs,” observed Kitchel. “We lost more matches than we won, but I think the focus for the girls was on having some fun, learning about the beach game and how it is different from indoors, and just having a chance to interact with one another during this strange year.

“We played all the matches (with the exception being the Soquel match which was cancelled due to a junior testing COVID-positive) in conjunction with Pacific Collegiate School (PCS), as both of our schools had only about six teams,” he continued. “PCS would play first, when they were done, then we played. The first match was versus Aptos High down at Rio beach. I think they had about 12+ teams. I think we won maybe two out of six matches that day, but all the girls did their best and seemed to enjoy the experience. Next we played Harbor High at their campus courts. We saw some of our younger teams do pretty well that day. Some of these players had very little sand volleyball experience, so it was nice to watch their excitement.

“The next matches we played were against Scotts Valley and then Santa Cruz High,” said Kitchel. “Both were held at Main Beach. At the last match versus Santa Cruz, there was a short celebration for the two seniors, Savannah Cambell and Kahlan Tervalon, including flowers, leis and video arranged by PK McDonald.” 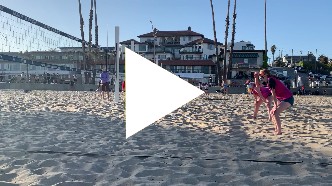 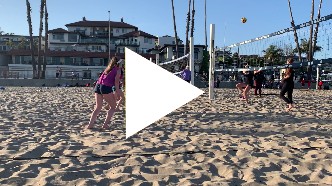 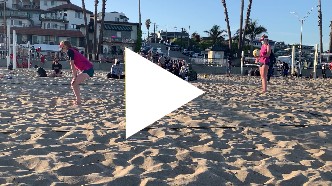 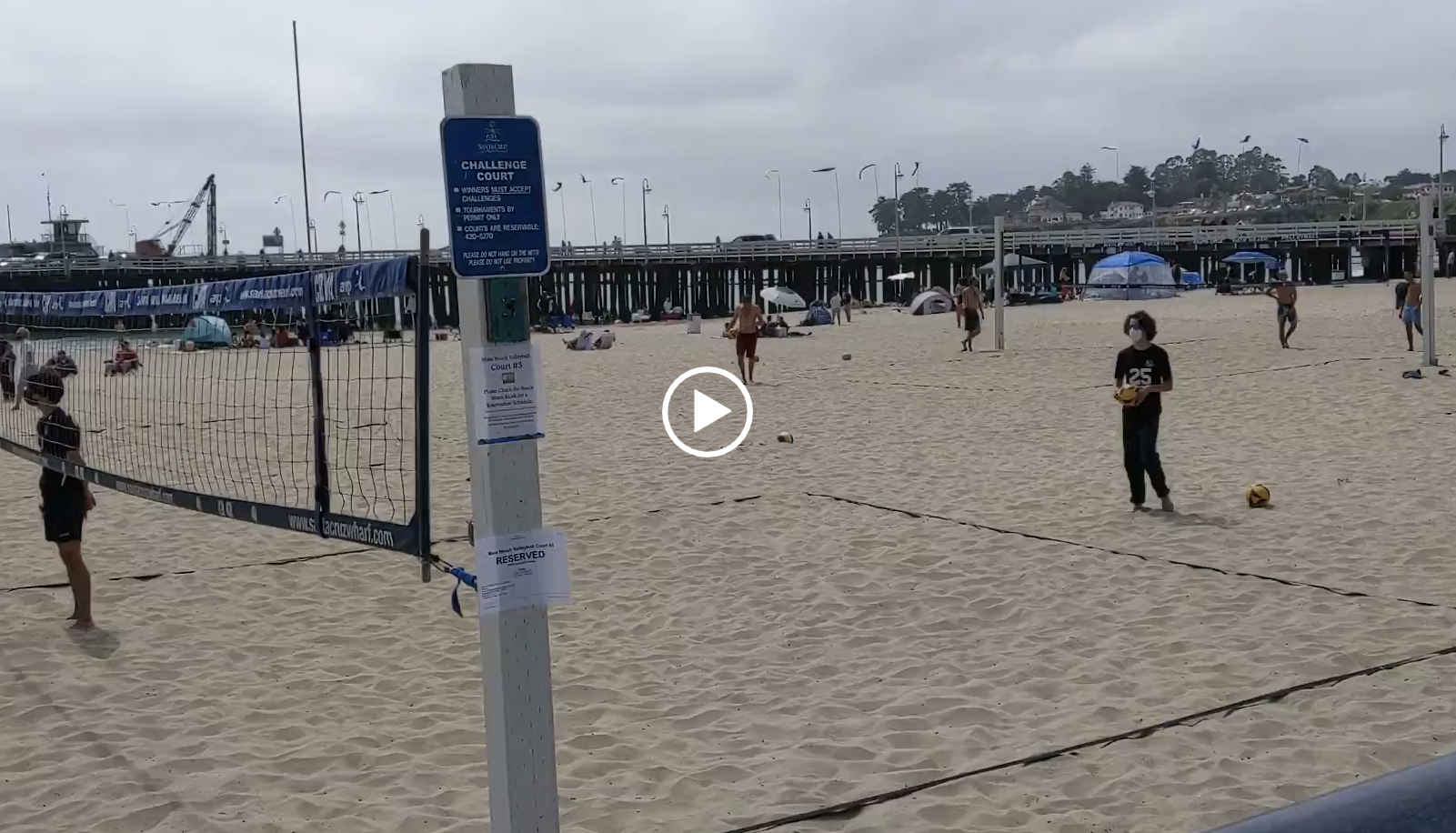 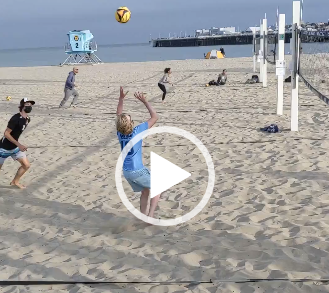 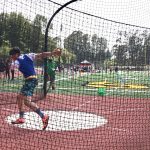 Track and Field, April 24, 2021: The Hawks made a great showing at the championships and we couldn’t be happier with how strong we finished our season! Some mentionable highlights from the season include:

– Grace Timan is the first athlete from the women’s track and field team to compete in 300m hurdles for Mount Madonna School, doing it for the first time ever in competition.
– Octavio Moreno will continue on to CCS (CIF-Central Coast Section) representing our school in both shot put and discus. Octavio finished league  2nd in shot put with a throw of 44’06” and 3rd in discus with a school record throw of 129’09”. CCS competition is scheduled for June 12 (trials) and June 19 (finals) in San Francisco. More information will be shared soon so we can support Octavio!
– Sky Weir, as a first time track athlete, did extremely well this season for us and is taking over the school record board by setting new records in four specific events, including a first-time record for triple jump. 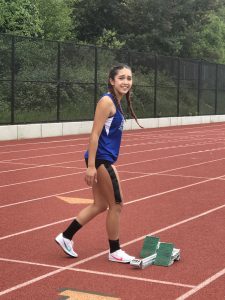 – Congratulations to all of our league qualifiers and top five winners: Zoey Ocampo with 5th place in varsity long jump, Ona Musoll-Buendia with 2nd in JV triple jump and Bella Cambell with 1st in J discus. Fantastic job everyone!! We look forward to our next season!
– Senior track and field athletes were celebrated at the Santa Cruz Coast Athletic League (SCCAL) championship finals with flowers, posters and baked goodies expressing gratitude for their contributions to the Hawks team, for helping to build the program, and for being positive examples to new team members.
“This season went by in a blink of an eye, but thank you all for showing up to play,’ said Coach Jameelah Johnson. “We did exactly what we came out to do; to play and to learn. We created goals for ourselves, then we went out and conquered them. I am so proud of everyone and their willingness to show up and be great. I want all the athletes to be proud of themselves and to truly sit with it, because you deserve it. In the midst of the year, these children still showed up and did their absolute best; we couldn’t be prouder. Keep working hard!”
“This year was an exceptional year for track and field with the season shortened to just six weeks, with three, regular season meets and then SCCAL trials and finals, practices for specific technique training, and on-the-track practice days which were key to out athletes’ success ,” commented Coach Sara Sobkoviak. “While practicing three days a week on campus after school was important for conditioning and weight training, we also scheduled a Sunday practice in the morning at Aptos High. These practices were key in getting our athletes comfortable with the track surface and field events.
“This year, as the result of Liana Kitchel’s recommendation for team building and added fun, we would often play a game of ultimate frisbee on the football field for a dose of healthy competitiveness,” she continued. “As seen in our stats and the amount of school records broken, this was definitely an important year for us in the league. The benefits of track and field this year were not only the opportunity to improve the physical fitness of our students, but also supporting their social-emotional health during this extraordinary time, when most have felt disconnected from their peers and have missed participating activities like this. To see wide smiles on faces, personal goals being accomplished, and new friendships being formed were by far the best parts of this season!”

Click the following link for the full results from the SCCAL finals. It is never too early to set your goals and keep your eye on the prize for next year!

Thank you to all for the support this season, and a special THANK YOU to parents David Miller and Stevan Manzur for helping score the shot put event this past week.  – Coach Sara Sobkoviak and Coach Jameelah Johnson

Senior Kira Kaplan wrote shared a summary of the high school track and field season in the recent issue of the student newspaper, the Mount Madonna Sentinel.

Track and Field seemed to take a leap this year as volleyball transitioned from indoor to beach, and cross country finished their season early. With an astounding 20 members, it’s become the most involved sport on campus with participation from all grades. The season finished with a total of six meets in April, with Mount Madonna athletes coming out in the lead in several events. Read more 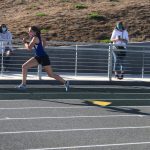 UPDATE – April 19, 2021: The Santa Cruz Coast Athletic League championships have been scheduled for April 22 and April 24 at Harbor High School. The schedule is TBA, check the website calendar for updates.

Track and Field, April 16, 2021: The track and field team finished regular season competition on April 15 with a successful meet at Aptos. The Hawks finished in the top three in many events and will be sending some of our athletes to #1 ranked positions in Central Coast Section (CCS) competition. This is a first for our Hawks! – Coach Sara Sobkoviak and Coach Jameelah Johnson 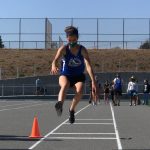 “I’m so proud of how we showed up today,” shared Coach Sara Sobkoviak. “This is big; everyone broke a personal record today, some new school records were set and I’m so proud of all of you and the hard work you are putting in this season!”

“Go team go!” commented co-Coach Jameelah Johnson. “Keep showing up in the best way that you know how and breaking records. I can’t wait to see what next week brings, so let’s practice hard!”

Check out the new MMS records from our Hawks:

Zoey is also now ranked #3 in long jump in ALL of CCS!!

Note: photos shown below are from both the April 1 and 8 meets. 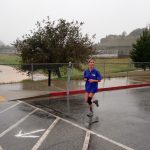 Cross Country, March 18, 2021: The high school cross country team participated in a meet at Scotts Valley High School. Teacher and Hawks fan Dan Gurska shares the following photographs and says “I am so proud of you all, and loved seeing you compete!”