COVID 19 Update: Mount Madonna School is committed to serving our students and returning to on-campus learning for the 2020-21 school year based on state and county health advisories. Although at this time, visitors are not permitted on campus, we are available to answer your summer inquiries and questions. Please fill out the Contact Us form and someone will get back to you soon. Please check back for updates.
AboutAdmissionsAlumniEventsHawk LifeHawk NewsSupportPre/KElementaryMiddle SchoolHigh School 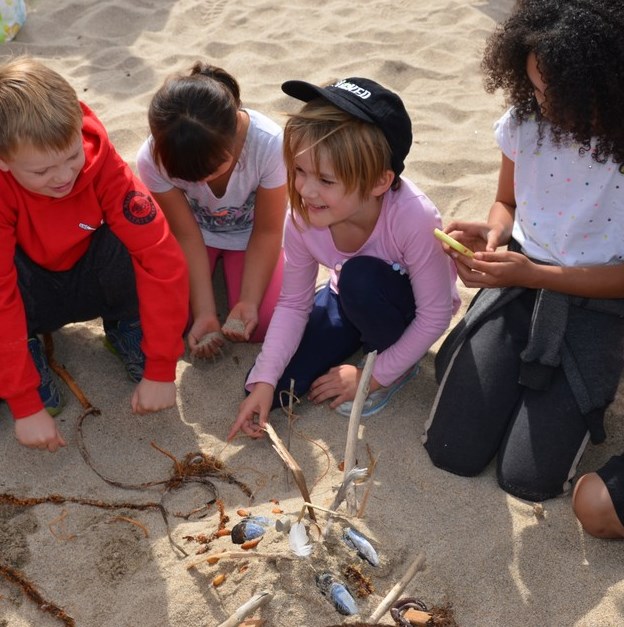 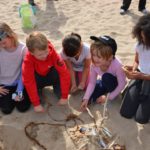 On a trail connecting Pescadero State Beach to a nearby marsh, students listened quietly to a story about the lives of the Ohlone people, early inhabitants of the area. While students commonly learn history through reading and museum visits, this group of Mount Madonna School (MMS) third and fourth graders was in nature’s classroom, spending two days along the central coast learning about local history, coastal ecology, and marine science.

Intertwined with the focused academic learning – a rich, explicit science and history curriculum – was, and perhaps most significantly, an implicit curriculum of process and relationship. 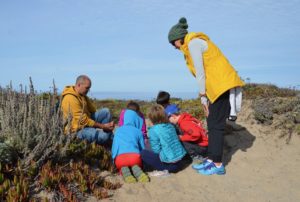 “In travelling together, students and adults strengthened their connections,” commented Heinrich. “For the kids, it was the joy of having flashlights and sleeping in bunk beds, of setting the table together and sharing in cleanup. The ‘worker bees’ and the ‘nature kids’ were able to come together in new ways. The unexpected ‘bridges of relationship’ as we worked alongside one another, walked marsh trails, observed the ocean or relaxed in the evening and played a fun game of cards were meaningful.” 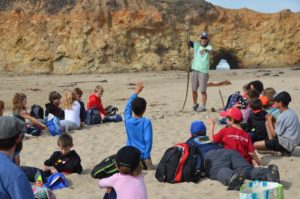 “Being a teacher for a 24-hour plus stretch creates a bond with students that you won’t get otherwise,” said Cabassa. “I work really hard all the time to make sure everyone feels comfortable in class. In sharing overnight activity, it changes the dynamic in positive ways and really boosts our community-building efforts, and this stays with us when we return to the school.”

“This journey to the Half Moon Bay area provided these children an opportunity to experience the environment with all of their senses, rather than just hearing about it in a classroom,” observed parent chaperone Claire Azar. “They were able to listen to a description of the marsh and create a hands-on model of what they thought it would look like, before actually hiking through it. They learned about the vegetation and even tasted an edible marsh plant; ask any one of them to tell you the name of that plant and my guess is that they will remember it!” 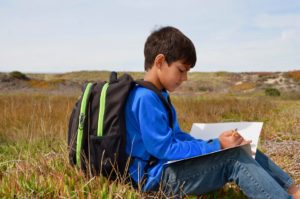 After the story, students hiked into the marsh, and sat along a dirt path amid the pickleweed and sprawling blackberry vines, reflecting and writing in their journals as they imagined themselves living the way the Ohlone did long ago.

“If I lived in an Ohlone tribe, my name would be ‘Yukas’ and I would hunt for food,” shared Ocampo-Sobkoviak, in a written reflection. “I would go down to the river and I would fish. I would catch so many fish that the whole tribe could eat two big fish each.”

Later, hiking deeper into the marsh, students came upon a sprawling Eucalyptus tree where they relaxed and listened to third grade teacher Hamsa Heinrich read a Native American tale about Jumping Mouse.

“After the story, when we were excused for climbing, we were careful not to peel the bark or be rough on the big tree,” said third grader Kaia Mangus. “It was fun and had many low, horizontal branches.” 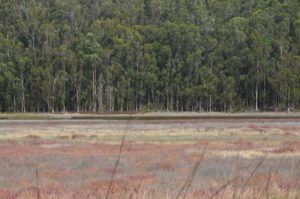 “I liked journaling at Pescadero Marsh,” shared classmate Nikowa D’Costa-Hemp. “We sat in the ice plant along the trail with a little space between each person and wrote in silence for about 15 minutes. I wrote about the landscape. It was a comfortable and sunny day. There was a little river and a little lake or estuary leading to the marsh. Behind the marsh was a forest. We could see a long meadow of golden grasses in the hills.”

“I liked when we went to the beaches and played Octopus Tag and the animal memory game,” said fourth grader Electra Azar. “I liked looking at and touching the jellyfish that had washed up on the beach. I learned where some of the Native Americans lived and what they used to survive.” 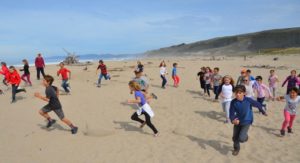 The program at Pescadero Marsh Natural Preserve and the adjacent beach was led by naturalist Nikki Doyle of Blue Water Ventures.

“She guided us through activities, including discussing Ohlone life, some games, and hands-on lessons, such as creating their own ecosystems using materials found on site,” explained Cabassa. “She was knowledgeable and energetic and really kept the kids focused.” 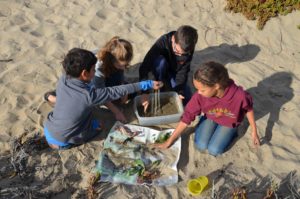 “I found that the lesson about the way a creature evolves and adapts to its environment over time was the most engaging for the students,” said Claire Azar. “Students were able to use beach objects to construct their own creatures and then explain to their classmates how their animal adapted to protect, transport and feed itself. As this was a group project, every member in the group had an opportunity to present their contribution to the creature and all seemed eager to do so. The kids learned cooperation skills while working in teams, which also helps to boost the self-confidence of a shy child.”

“Our creatures did not have to be real, but we had to show some sort of adaptations,” explained third grader Jaxson Alciati. “Our group built a fish that was sort of like an Anglerfish. It had a long antenna made from dried seaweed that looked like it would glow. We wanted our creature to be a predator, so we used some sharp sticks for teeth and put on crab pincers to show that it ate crab. It was cool to learn about each other’s creatures and we found so many interesting things at the beach to use.”

The students, teachers and accompanying parent chaperones stayed overnight at the historic Point Montara Lighthouse Hostel. They enjoyed their accommodations, and everyone pitched in to help with preparing and cleaning up meals, rooms and common areas. 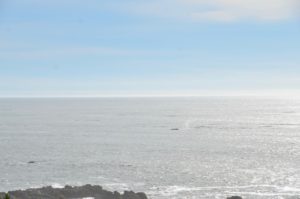 “When we got to Montara, we stood on the high cliffs looking out over the ocean,” shared third grader Siena Liddicoat. “We saw some big Humpback whales and very large waves. The whales were sticking their tails out of the waves. The ocean was so beautiful; it was all churned up and had brownish-blue waves. It looked like a painting. We saw a lot of giant rocks out to at sea and the waves sprayed over them. It was really fun to see the gigantic whales, and the big waves crashing against the enormous rocks.”

“One of my favorite parts was seeing our rooms at the hostel,” said classmate Cora Kayne. “There were three bunk beds in my room and I slept on the bottom bunk. There were board games and a train set. We had to make our own beds and it was fun for me to be in charge of my own room. We had dinner and a lovely night program.” 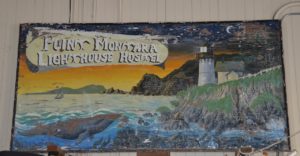 The next morning, windy and wet weather necessitated a change of plans, and teachers and chaperones provided alternative indoor activities to stimulate the students’ interest.

“As a parent, I believe in allowing children to learn and explore outdoors, experiencing the environment hands-on. I LOVE that at Mount Madonna School my children have the opportunity to learn and explore the outdoor environment on a regular basis during their normal school days, and especially on field trips. Remarkably, for the first time in my children’s lives, they prefer weekdays over weekends because of school!”