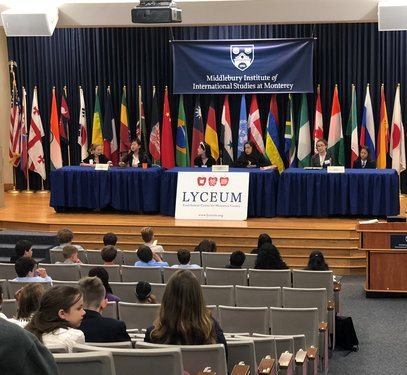 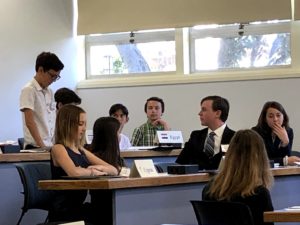 On Saturday, May 11, Mount Madonna School (MMS) sixth and seventh grade students participated in the 10th Annual Middle School Model United Nations Conference organized by the Lyceum of Monterey County and held at the Middlebury Institute of International Studies in Monterey. .

The conference was an all-day event that included an opening ceremony with Lisa Martin, executive director of MUN Impact, as keynote speaker, and was attended by middle school students from several area schools. This was the first time that MMS middle school students have participated in a Model United Nations (Model UN). event. 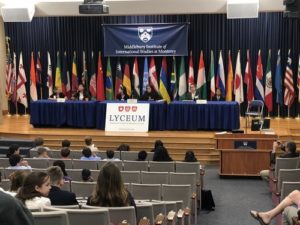 Students were organized in pairs and assigned a country and a committee to work on debating a global issue with other delegates at the conference. These included, the Security Council, which looked at the current situation in Venezuela; the World Health Organization Executive Board (WHO), that discussed the topic promoting the health of migrants; and the General Assembly Third Committee, Social Humanitarian and Cultural, which debated human rights to safe drinking water and sanitation. 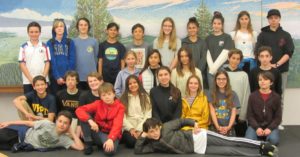 At the conference, students spent half of the day debating their views and the other half trying to agree on a resolution (action plan) to draft into a formal UN-style resolution contract.

“The conference was a success,” said teacher Chrislaine Miller. “Our students did really well, even as first timers. Seventh grader Ethan Lee was selected by his committee (WHO) to be on the panel discussion at the closing ceremony. Secondly, classmates Wyatt Adams and Henry Jacob’s position paper (Dominican Republic, WHO) won an award for best position paper. 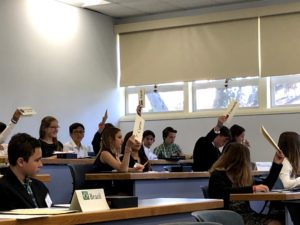