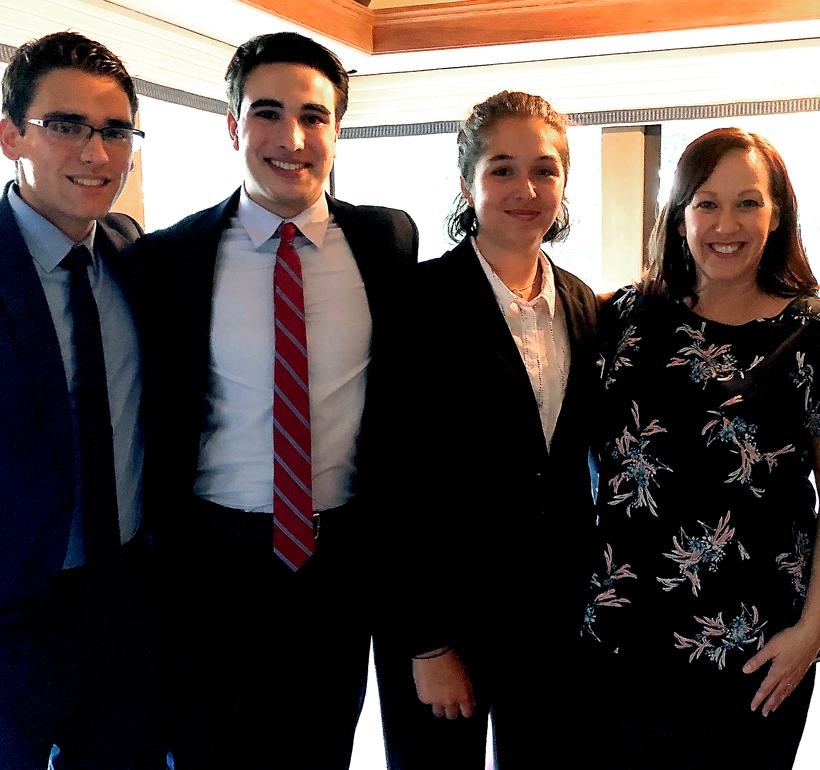 “I saw MJ’s campaign video – which has since gone viral – and was so impressed I sent a donation,” shared faculty member Ward “SN” Mailliard, “As a result I was invited to the fundraiser, and asked the organizer if f I could bring a few of my Values in World Thought students. The organizer said yes, and so we went.”

Mount Madonna juniors and seniors take the two-year Values in World Thought social studies class developed by Mailliard and co-taught with Shannon Kelly, travelling every other year to Washington, D.C. to interact with the nation’s leaders.

“We all walked in with little knowledge of who MJ Hegar is or what we would get out of the event, and this forced me to be open to whatever the experience had to offer,” observed Dias. “I loved connecting with people from way outside my circle. Standing at the door meeting people with a smile, interacting and creating thoughtful conversation was valuable to me. The first man we met worked in corporate law. He shared with Anika, Cyrus and I that we should try and get to know as many people as we can; that by broadening our circle we would be broadening our connections to new opportunities. That was awesome advice.”

Hegar is vying for the Congressional seat for Texas District 31, which includes a strip of central Texas from north Austin up to Temple, as well as a portion of the area surrounding Fort Hood, giving the district a strong military presence. Republican John Carter has served as the representative from this district since its creation in 2003.

As an Air Force rescue helicopter pilot, Hegar saw three tours in Afghanistan before being shot down by enemy fire and earning a Purple Heart. After returning to home, she partnered with the American Civil Liberties Union on a multi-year quest to have all military jobs open to women. This effort met with success in 2013, when then Secretary of Defense Leon Panetta repealed the ground Combat Exclusion Policy.

“As an Air Force officer, I swore an oath to support and defend the Constitution of the United States against all enemies, foreign and domestic,” said Hegar in a statement on her campaign website. “Divisive policies that isolate us from the world with no consideration for our history of religious freedom, welcoming immigrants, supporting our allies, and fulfilling our promises pose a threat to the very ideals upon which our country and our Constitution were founded. It’s time we stop simply voting down party lines and start electing strong, reasonable, solution-oriented citizens.”

“On September 16, I had the pleasure of meeting a very bright and quick-minded woman,” said Kamkar. “I always appreciate people who are committed to service and who don’t let political bias or partisanship, affect their duties to our nation. As someone who leans on the conservative side of the political spectrum, I would gladly vote for MJ over her Republican opponent, given this factor. Partisanship is a big issue in D.C., and it only puts a hold on compromise and producing good for the American people, which greatly damages how our republic functions.

“At a time of great polarization in our country, it was refreshing to hear MJ not kowtow to mainstream ideals in hopes of having a better chance of being elected,” he continued. “She is authentic, and I believe Americans are gradually moving towards candidates who are authentic, and not typical politicians. It also helps that she is a veteran, because it proves her dedication to our country. For that, I thank her.”