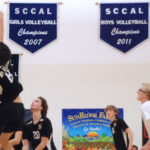 Track and Field, Week of March 2: On March 6, the Hawks had a robust showing in a meet held at Watsonville High School. Octavio Moreno was a strong winner, placing 3rd in both varsity shot put (40′-06″) and varsity discus (99′-02″). Eight teams participated in the meet, and the MMS Freshmen/Sophomore women’s team placed 3rd overall, with a score of 56.6 points. Among this team’s achievements: 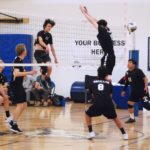 Boys Volleyball, March 4: The boys varsity season is underway! The team is 2-1 in pre-league play. Some match highlights so far include Ben Pearson with 22 kills, Noah Tervalon with 32 assists, Ronan Lee with 6 aces against Pajaro Valley, and Addy Catterall-Pendleton with 16 digs versus PCS. The team’s next pre-league gamesis at home vs Monterey on March 5. Santa Cruz Coast Athletic League play begins with a home game against San Lorenzo Valley on Thursday, March 12. Come cheer on our HAWKS!!