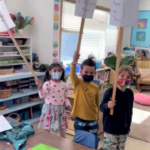 As a six-year-old first grader in 1960, Ruby Bridges walked past enraged protestors and into history as part of desegregating Louisiana public schools. That such a young child could overcome fear and face this staggering challenge wasn’t lost on Mount Madonna School (MMS) first grade students, who have been learning about Bridges as part of their study of the civil rights movement.

“Ruby Bridges was a child about our age,” said first grader Zara Sidhu. “She was the first Black person to enter a white school. They did not welcome her, and the marshals surrounded her just in case, and it’s a good thing, because she did need protecting.”

To get a feel for what the Bridges and other civil rights figures endured, teacher Cassia Laffin described to her students different seminal historical moments, including Bridge’s fearful morning arrivals at school, guarded by police officers and holding her mother’s hand.

In addition to Bridges, Mount Madonna first graders are learning about civil rights more broadly, and their recent studies include a focus on Martin Luther King Jr. and Rosa Parks. 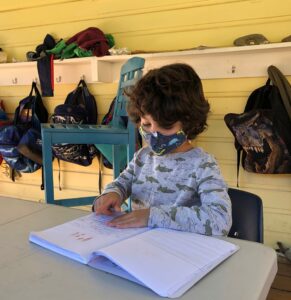 Students acted out a skit of Parks’ refusal in 1955 to give up her bus seat to a white man in Montgomery, Alabama, an event that helped to initiate the civil rights movement. Students made props to include and performed the skit several times, so they each could take turns experiencing different roles.

While some students read from scripts, others repeated the lines as shared by Laffin, and all of the students were engaged.

“Rosa Parks was a Black woman who refused to move to the back of a bus for a white man,” said first grader Finny Aguirre.

“It was pretty hard being Rosa Parks,” commented classmate Ryker Osterlund, who portrayed the role of Parks in one of the skit performances, “and nice that a lot of people were on her team.”

“It just wasn’t fair,” added Aguirre. “You should judge somebody by their character.” 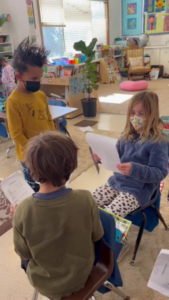 In their class skit, Sidhu said she had the experience of several roles, including portraying the police officer who fingerprinted Parks, a narrator, and Parks herself. “And by their heart,” agreed Osterlund.

“Finding ways to promote empathy in my students is of utmost priority for me,” commented Laffin. “Experiential learning is far more impactful and memorable than simply reading books about a given subject. Through our Rosa Parks skit, students had the chance to step inside of the shoes of the key players during this time. The experience became much more real to them. They were involved, enthusiastic and passionate. Students wanted to do the play over and over again and continued to ask when we could do it again throughout the week.”

Students also wrote imaginative first-hand narratives as though they were Rosa Parks and Ruby Bridges. They began by introducing themselves and then proceeded to share about themselves, their experiences, and most importantly, how those experiences of discrimination and segregation made them feel.

“When I was being Ruby Bridges, I did not feel good even with the bodyguards,” wrote student Hendrix Kasznar. “I 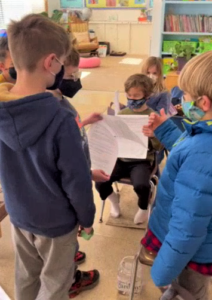 think she was very brave.”

“As Rosa Parks, students became the person being treated unfairly,” said Laffin. “As protesters they were the ones supporting Rosa and defending her by boycotting the buses. Hearing students stomping and marching and chanting ‘boycott the bus’ and ‘equal rights’ held a contagious and powerful energy in which the students seemed emboldened and empowered.”

Cultivating social-emotional intelligence is an intentional practice at Mount Madonna School, and an explicit part of the first-grade curriculum. Laffin has read many books on this topic with students.

“Through stories we learn that we have many different seeds of emotions,” said Laffin, “some of which create closeness and others that create divisions between individuals. Through our unit on the civil rights movement, I hope for children to learn the importance of practicing kindness and develop a recognition of how their actions impact others around them, as well as the power of standing in opposition to what is wrong and standing up for what is right.”