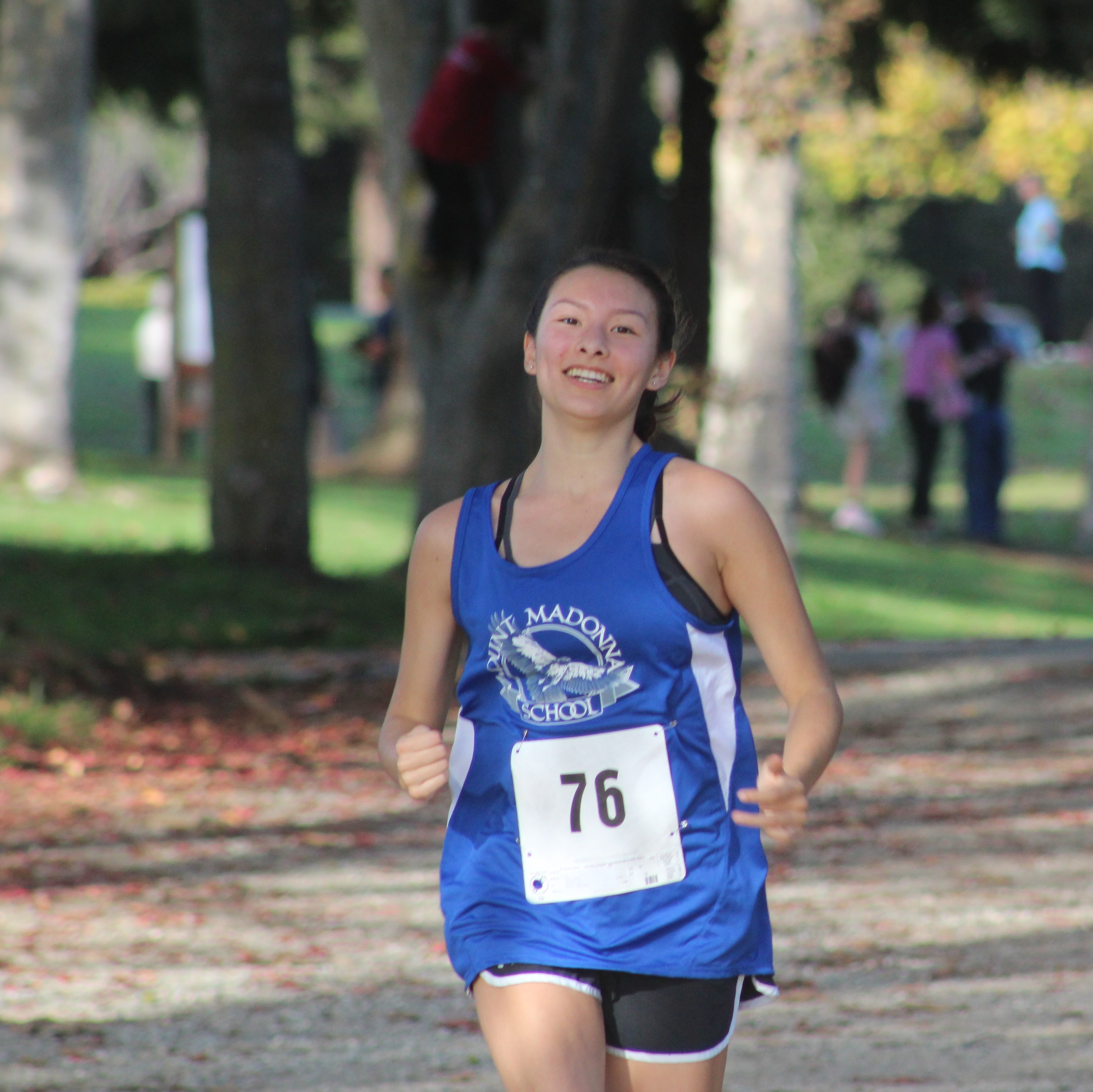 “Personal best” is, well, “personal,” and can vary substantially among individuals. For the 2016 Mount Madonna School (MMS) cross country team, the idea of personal best meant setting and working to achieve self-identified training and competition goals. “I encouraged each athlete to… 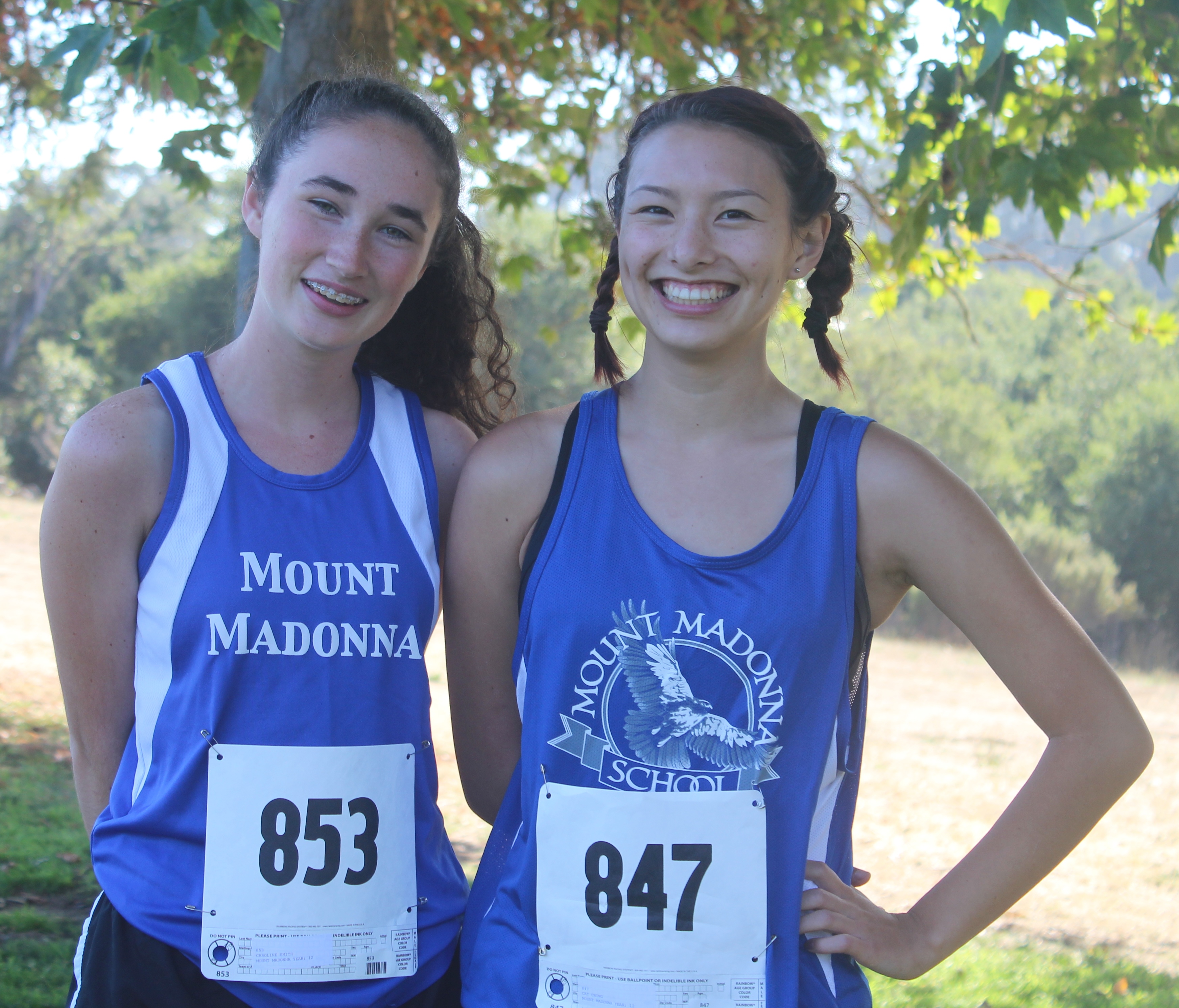 Congratulations to Mount Madonna School (MMS) junior Cat Ching, who qualified and competed in the Central Coast Section (CCS) cross country championships on November 14. Ching placed 39 out of the 72 division five (D-V) runners with a time of 23:27.6 in the three-mile race, and is the first female runner representing MMS to compete in CCS!
Ching and her teammates, juniors Caroline Smith and Abigail Gray, were also honored as having the highest collective scholastic average among CCS D-V teams, 3.926, and the second highest average among all CCS cross country teams. Congratulations to these scholar athletes!
‘I was unfamiliar with the course and it was mostly hills, which was kind of difficult,’ shared Ching following the race. ‘But after running hills up at MMS I think I was better prepared than I expected. I was especially pleased our girls team won first place for the scholastic award in our division!
‘At the beginning of the season, I joined the cross country team for exercise and fun — and because I didn’t want to play volleyball,’ she explained, smiling.  This is a strong statement for a student at a school that lives and ‘breathes’ volleyball from elementary through high school. ‘Along the way, my teammates were all so open and welcoming that it made me really comfortable and more open, too; and not only for cross country, but at school and in my everyday life. At each meet our team and supporters were so loud and so confident; we weren’t ever first, but everyone was really happy and enjoyed being part of it!
‘For the CCS meet I was appreciative of the people who supported me and wished me good luck. I was nervous before the race and knowing I had people backing me up helped a lot. I couldn’t have been there without our awesome coach, Steven Harrington, and teammate (and ‘co-coach’) Ethan, who showed up at the race to do the warm up run with me, even though he didn’t have to.’
In addition to participating in the CCS finals, it was quite a weekend for Ching in other ways, too. On Friday she departed with several high school students to participate in the three-day Model United Nations Assembly at Stanford University. Early Saturday morning, instead of heading off to the committee she was assigned to, she donned shorts and running shoes and headed for the trails at the Crystal Springs Cross Country Course in Belmont. After the race, she didn’t miss a beat, returning to Stanford and rejoining the WWII Soviet cabinet committee to debate global political issues.
The Scholastic Championship Team awards were instituted by the CCS Board of Managers in 1985 as a way to recognize teams with the highest collective grade-point average in their respective sport during that season of competition.
‘My goal is to make it to state next year,’ said Ching. ‘Maybe not, maybe it won’t happen, but it’s my goal.’
####
Photo by Shmuel Thaler
Contact: Leigh Ann Clifton, Director of Marketing & Communications, [email protected]
Nestled among the redwoods on 355 mountaintop acres, Mount Madonna is a safe and nurturing college-preparatory school that supports students in becoming caring, self-aware and articulate critical thinkers, who are prepared to meet challenges with perseverance, creativity and integrity. The CAIS and WASC accredited program emphasizes academic excellence, creative self-expression and positive character development. Located on Summit Road between Gilroy and Watsonville.
Read More > 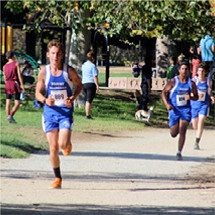 Among the dozens of high school cross country runners throughout the county who are participating in the Santa Cruz Coast Athletic League (SCCAL) this season, the competition is very strong — including one nationally-ranked female athlete.
Read More >